Everything you should know about Non-Destructive Testing (NDT) 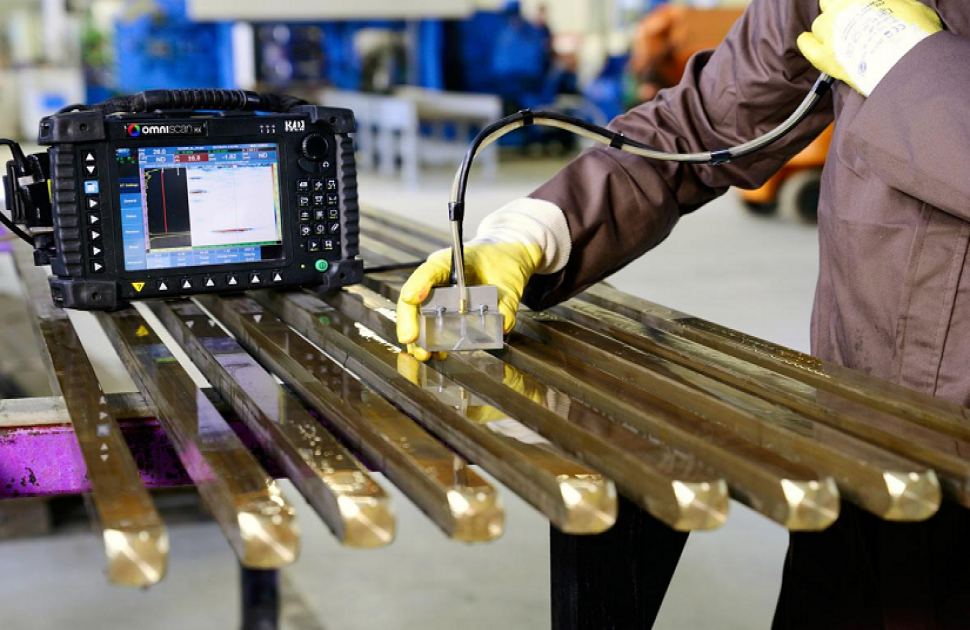 The standard US terminology for Non-Destructive Testing is defined in standard ASTM E-1316. Some definitions of the term may be different in European standard EN 1330.

The most frequently used NDT methods are eddy-current, magnetic-particle, liquid penetrant, radiographic, ultrasonic, and visual testing. Let's have a detailed look at each of these testing methods.

1. Eddy Current Testing (ECT):  Eddy current testing is based on the physics phenomenon of electromagnetic induction. In an eddy current probe, an alternating current flows through a wire coil and generates an oscillating magnetic field. If the probe and its magnetic field are brought close to a conductive material like a metal test piece, a circular flow of electrons known as an eddy current will begin to move through the metal like swirling water in a stream. That eddy current flowing through the metal will in turn generate its own magnetic field, which will interact with the coil and its field through mutual inductance. Changes in metal thickness or defects like near-surface cracking will interrupt or alter the amplitude and pattern of the eddy current and the resulting magnetic field. This in turn affects the movement of electrons in the coil by varying the electrical impedance of the coil. The eddy current instrument plots changes in the impedance amplitude and phase angle, which can be used by a trained operator to identify changes in the test piece.

3. Liquid Penetrant Testing (LPT) is one of the oldest methods of NDT In this technique, two solutions are used – a penetrant that is first applied to the component's surface to be tested and a developer that combines with the penetrant to help reveal tiny cracks or other imperfections. After the penetrant is applied, it is allowed to "soak in" for a prescribed period of time to help reveal the defects that extend below the component's surface. This technique is used in various industries and is one of the most popular NDT techniques because it is inexpensive, requires no costly special equipment, and relies on limited experience and training, making it widely accessible to companies of all sizes.

4. Radiographic Testing (RT) uses x-rays or radioactive isotopes to evaluate components to evaluate the human body's structures. It involves sending the radiation through the component and measuring the amount that emerges on the opposite side. The result is a photographic-type image that reflects areas of different densities, including areas where material may be missing or thin, such as in cracks or areas of weakness. Radiographic testing can be difficult to use on components with irregular surface areas since those irregularities can influence the thickness of the materials that are being evaluated.

5. Ultrasonic Testing (UT) uses high-frequency sound waves, i.e., ultrasonic pulse waves, to detect flaws or other imperfections or defects in metal components. It can also be used to identify and monitor changes like shifts in thickness within the components that may result in failure or other future problems. It is one of the most commonly performed testing methods on metals and metallic alloys, but it can also be used to test concrete and composites, and sometimes even wood. It is widely used to evaluate corrosion in pipelines and other enclosed structures or components. Although it offers the advantage of deep penetration to assess problems within components, ultrasonic testing requires a high degree of training and competence to apply the method and interpret the results (may be affected by surface imperfections or irregularities). Ultrasonic testing is divided into 3 parts i.e. Pulse-Echo (PE), Through Transmission (TT), and Time of Flight Diffraction (ToFD).

6. Visual Testing (VT) can be done with the naked eye by people known as the "inspectors" responsible for visually reviewing a material or asset. For indoor visual testing, flashlights are used by inspectors to add depth to the object being examined. It can also be done with an RVI (Remote Visual Inspection) tool, like a camera. NDT inspectors may usually use a robot or drone or hang it from a rope to get the camera in place.

7. Thermal/ Infrared Testing (IRT)- Infrared testing or thermography uses sensors to determine the wavelength of infrared light emitted from the surface of an object, which can be used to assess its condition. It is useful for detecting overheating bearings, motors, or electrical components. Often used to monitor heat loss from buildings, it is often used to detect near-surface delaminations or bonding defects in composites.

Now that we have understood the different methods of doing Non-Destructive Testing, let’s have a look at the advantages of NDT.

There are a number of distinct advantages, the most obvious being that the pieces being tested are left undamaged, allowing for an item to be repaired rather than replaced should any problems be found.

It is also a very safe testing method for operators, with most techniques being harmless to humans, although some types of tests - such as radiographic testing - still need to be conducted under strict conditions. This testing technique can also help prevent injury or fatalities by ensuring structures, components and machinery are safe.

NDT is a very accurate way of inspection since the tests are repeatable and a number of tests can be used together to correlate results. These testing methods are also economical. Unlike destructive testing, non-destructive testing is cost-effective as it can prevent the need to replace an item before a malfunction occurs without destroying the piece itself.

It also offers the operators a peace of mind, knowing that equipment is functioning as it should, preventing fatal accidents, and determining any measures that can be taken for life extension.

It can be used for testing of welds and verification of welding procedures to ensure that a welding process has been completed to the correct specification within the bounds of quality control, for example, to make sure that the base metal has reached the correct temperature, cooled at the specific rate and that compatible materials have been used to prevent welding defects.

• Career prospects in the NDT industry

NDT is an emerging field and not many candidates are willing to take a plunge in this field. The personnel who perform these processes are trained to use non-destructive testing (NDT) equipment and called NDT inspectors. They use specialized equipment like X-ray cameras and ultrasound machines to inspect the infrastructure of our modern machines.

NDT inspectors are not required to have a degree, but they are required to have a high school diploma or GED and must complete a minimum amount of formal classroom training covering NDT theory and equipment use. In most cases, the required training will be mostly hands-on and can be completed in less than a year.

Where are the industries where non-destructive testing methods are used?

Depending on how broadly you define ND Testing, you could say that it’s used in almost every industry in the world, since visual inspections (whether formalized or casual) take place in almost every workplace in some form or other.

That being said, there are specific industries that require ND Testing and have formalized processes for its use, as codified by those organizations we listed above like API and ASME.

It also includes inspection of both metallic and non-metallic (polymer and composite) components and structures. According to requirements, NDT can be undertaken during production, post-production, in-service and following repair.

Conclusion: With so many different testing methods at our disposal, it might get overwhelming to select the best one. However, we at One Stop NDT are here to help for any support in identifying the technology for particular application. Also, you can choose the perfect testing method after studying which one suits your needs best.

The main objective of One Stop NDT is to create awareness to the NDT Market (Equipment Manufacturers, service providers, distributors, plant operators, and NDT professionals) about the development in the industry and new products & services’ availability in the global market and to provide them with direct access to interact and explore on the possibilities of helping and working together.