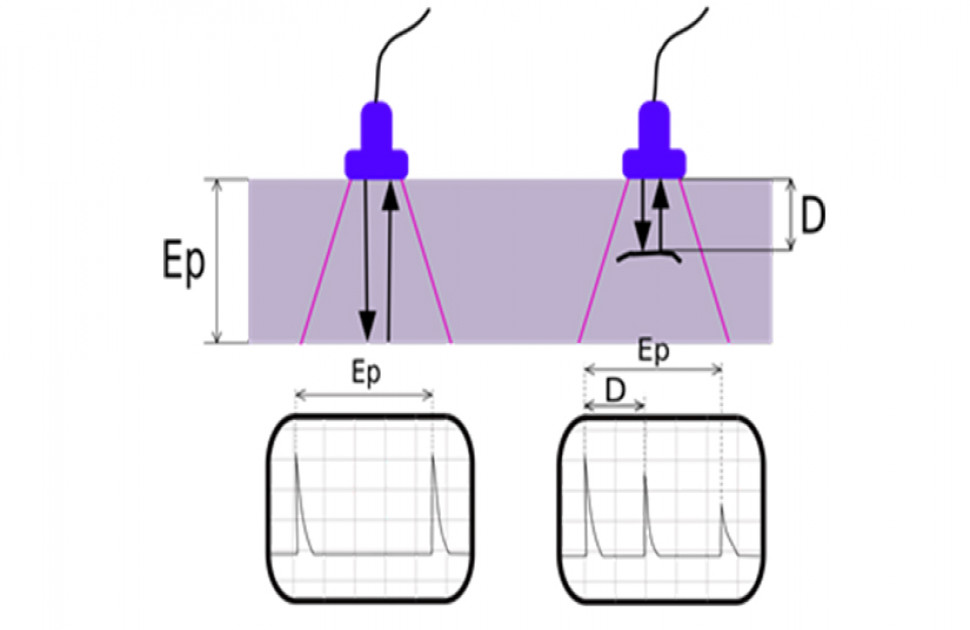 What is Ultrasonic Testing?

Ultrasonic testing is a non-destructive testing procedure used in today's industries. It is a versatile and extremely helpful approach for detecting material discontinuities. Like healthcare and underwater navigation, Ultrasonic testing NDT is an essential means of testing and detecting anomalies. It is used in healthcare by OB/GYNs to check for malformations in pregnant women, and it is also used in ships to detect items beneath the water's surface.

High-frequency noises, often known as ultrasonic waves, are sent through a material or object to check for faults or characterize the material. Short ultrasonic pulse waves with center frequencies ranging from 0.1 to 15 MHz and occasionally up to 50 MHz are delivered into materials for characterizing materials or identifying internal faults in the most typical ultrasonic testing applications.

One frequent example is ultrasonic thickness measurement, which checks the thickness of the test subject, such as for monitoring pipeline corrosion.

Why is Ultrasonic Testing Important?

Ultrasonic testing detects continuities in part by using high-frequency sound waves that flow through it. Some sounds will reflect back if the sound portion meets a material with a differing acoustical impedance. The sending device picks up this reflected sound and displays it on the screen as an indication. Since the technician already knows the velocity at which sound travels through a part and the period of transit, he will utilize this knowledge to compute the distance to the indicated material with a change in acoustic impedance.

Ultrasonic testing is crucial since it is utilized in numerous applications. One good example is ultrasonic thickness measurement, which is used to determine the thickness of an object, such as in the assessment of piping corrosion. Because ultrasonic testing is a non-destructive technology, it is ideal for finding errors and flaws without causing material damage.

You can avoid future problems by using ultrasonic testing to check for defects or corrosion growth regularly. This is because you can detect damage early and prevent a machine part, component, or entire thing from falling. Construction, aerospace, medical, automotive, metallurgy, and manufacturing are just a few industries that use Ultrasonic testing NDT.

A sound wave is sent into a test substance by a probe, as depicted on the left. There are two signs, one from the probe's first pulse and the other from the back wall echo.

As illustrated in the right-hand figure: A fault produces the third indication while also lowering the amplitude of the back wall indicator. The ratio D/Ep determines the depth of the flaw. 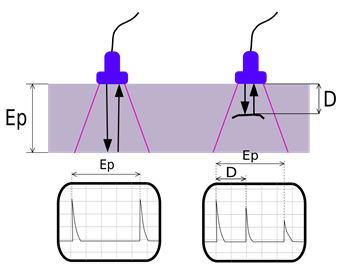 Ultrasonic testing is based on a process known as ultrasonography, which is basically the transmission and reflection of sound waves. Ultrasonic waves are sent through the substance to be evaluated and then reflected back into a receiver in this procedure. This receiver then processes the signals, which creates a three-dimensional representation of the materials, allowing any flaws to be spotted.

The ultrasonic waveform is received in one of two ways. Reflection and attenuation techniques are the two types of ultrasonic testing.

The transducer accomplishes both the sending and receiving of pulsed waves in reflection (or pulse-echo) mode, as the "sound" is reflected back to the instrument. Reflected ultrasound is generated via an interface, such as the object's back wall or a flaw within the object.

A transmitter delivers ultrasound through one surface. A separate receiver measures the quantity reached on another surface after passing across the medium in attenuation (or through-transmission) mode.

Imperfections or other factors in the area between the transmitter and receiver cause less sound to be transmitted, revealing their presence. The couplant improves the process' efficiency by lowering ultrasonic wave energy losses caused by the separation between the surfaces.

What is the Ultrasonic testing procedure?

The transducer, receiver, and display devices are all functional aspects of a conventional ultrasonic testing detection system. A receiver is an electronic device that generates high-voltage electrical pulses. A pulser, on the other hand, drives a transducer to generate HF ultrasonic energy. Sound energy is generated and propagates through the waveform's materials. The ultrasonic calibration block must be used to calibrate all processes.

However, when using an Electromagnetic Acoustic Transducer (EMAT) for ultrasonic Testing, couplant is not required.

Some energy is reflected from the defective surface in the event of a disconnection, which cracks in the wave path could cause. The reflected wave signal is then converted into an electrical signal and shown on a screen by the transducer.

What are the Advantages and Disadvantages of Ultrasonic Testing?

In the manufacturing environment, ultrasonic testing has numerous advantages. Here are a few examples.

Where is ultrasonic testing used?

Ultrasonic testing is frequently utilized in industrial applications on metals, polymers, composites, and ceramics. Wood and paper goods are the only common technical materials that cannot be tested with standard ultrasonic equipment. In the biomedical field, ultrasound technology is frequently employed for diagnostic imaging and medical research.

Ultrasonic testing's ability to pinpoint the exact location of a weld discontinuity is one of its most helpful features. This form of testing necessitates a high level of operator training and competence and the development and implementation of appropriate testing protocols. This procedure can be performed on ferrous and nonferrous materials. It is typically appropriate for testing thicker parts accessible from only one side and can often reveal finer lines or plainer faults that radiographic testing may not be able to detect.

What is an Ultrasonic transducer?

Any device that transfers one form of energy into another is a transducer. Electrical energy is converted into mechanical vibrations (sound waves) using an ultrasonic transducer, and sound waves are converted back into electrical energy. They are typically compact, hand-held assemblies that come in various frequencies and styles to meet specific testing requirements.

What is an Ultrasonic thickness gauge?

An ultrasonic thickness gauge is a device that emits sound pulses in a test piece and measures the time interval between them with extreme precision. The gauge, which has been programmed with the sound velocity in the test material, uses that information along with the measured time interval to compute thickness using the simple formula [distance] = [velocity] multiplied by [time].

How accurate is ultrasonic thickness gaging?

Commercial ultrasonic gauges may attain an accuracy of +/- 0.001 mm in ideal conditions, with an accuracy of +/- 0.025 mm or greater in most common engineering materials. The homogeneity of sound velocity in the test material, the degree of sound scattering or absorption, the surface quality, and the precision and care with which the instrument has been calibrated for the application at hand are all factors that affect accuracy.

The assessment of remaining wall thickness in corroded pipes and tanks is a common use for ultrasonic gauges. The measurement can be completed quickly and easily without requiring access to the interior or emptying the pipe or tank. The thickness of molded plastic bottles and similar containers, turbine blades and other precision machined or cast parts, small diameter medical tubing, rubber tires, conveyor belts, fiberglass boat hulls, and even contact lenses are measured as all examples of vital applications.

What is an ultrasonic flaw detector?

Sound waves flowing through a material will reflect off imperfections like cracks and holes in predictable ways. An ultrasonic flaw detector is a device that generates and processes ultrasonic signals to produce a waveform display that a trained operator can use to locate hidden faults in a test piece. The operator recognizes a good part's characteristic reflection pattern and then searches for changes in that pattern that could signal faults.

What kind of flaws can you find with a flaw detector?

Ultrasonic defect detectors can detect and analyze a wide range of cracks, voids, disbonds, inclusions, and other issues that compromise structural integrity. The size of the minor detectable imperfection in a specific application is determined by the type of material being evaluated and the type of flaw being considered.

What are the other types of instruments available?

You must have noticed after reading this article that ultrasonic testing is critical in sound transmission. It is an important technique that must be carried out by qualified professionals in order to be effective. As a result, you should be cautious when applying the procedure to prevent adding to the material's problems rather than decreasing them.

Got any questions related to ultrasonic testing? Feel free to drop them in the comments section and get them answered by NDT experts.