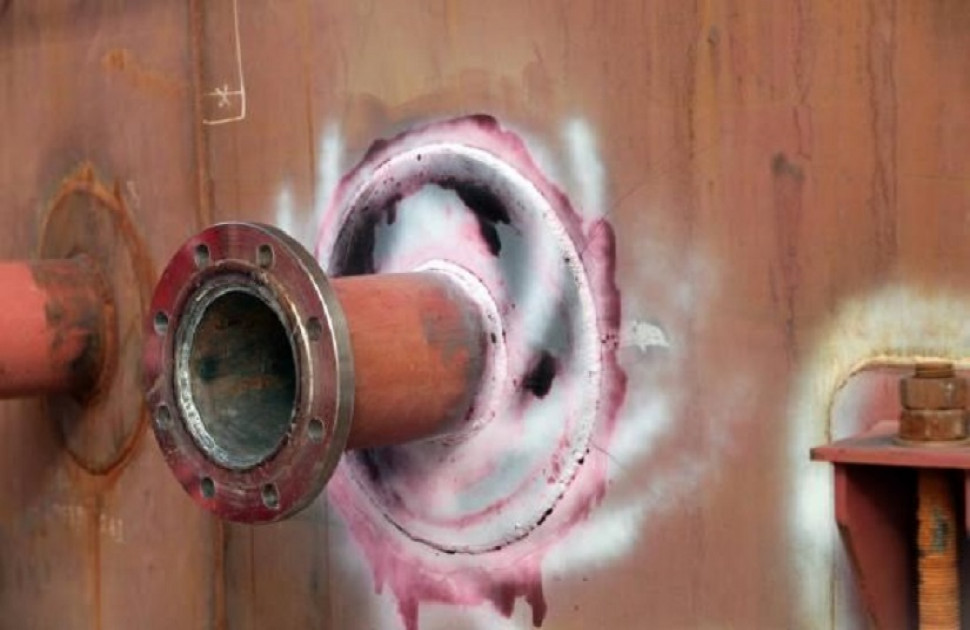 Dye Penetration Inspection(DPI), is also known as Penetrant Testing(PT) or Liquid Penetrant Inspection (LPI), is one of the oldest and simplest non-destructive methods that is widely used in so many fields to expose defects such as fractures, cracks, incomplete fusion, defects in joints, grinding defects and porosity. This particular testing technique helps us in finding out abnormalities in cast iron, steel, brass, aluminium, copper, magnesium, satellite, carbides, ceramic, and even materials made of plastic. This states that dye penetration inspection is favourable for ferrous as well as non-ferrous elements. Dye penetration inspection is cost-effective in nature when compared to other non-destructive techniques.

The dye penetration testing is based on the philosophy of capillary action, where a fluid having a low surface tension penetrates into a clean & dry surface to identify flaws only if the fluid is kept for a specific time period which is known as "Dwell Time". In this process, a liquid penetrant is applied onto the surface of the material by spraying, brushing or dipping the object into the penetrant. When the dwell time is over, the excess amount of the liquid entrant has to be removed so that a developer can be applied in the next step. The developer plays a vital role here as it draws the penetrant out of the defect, which creates an unseen indication, but it can be seen by the inspector. Dye penetration testing is executed under ultraviolet or white light as it depends on the type of dye used during the whole process, i.e. fluorescent or non-fluorescent. 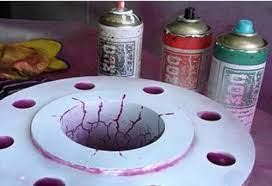 So, here penetrants can be classified into levels of sensitivity. Penetrants that are visible are generally red in color and have the lowest sensitivity. In contrast, fluorescent penetrate comprises two or more dyes that fluorescein when they are excited by ultraviolet radiation, which is also known as black light. Fluorescent penetrants are high in sensitivity as they are executed in darkness; the dyes emit a striking yellow-green color light that contradicts strongly against the dark atmosphere.

There are many factors that need to be considered while choosing a sensitivity level, such as the surface of the material, the environment in which the test will be conducted and the size of the flaw that has to be inspected. This whole process is quite simple and affordable because it only requires some lint-free cloths, aerosol spray cans and a perfect environment.

a) Surface Cleaning - The first step is to clean the surface of the material that is being evaluated so that all the dirt, oil, paint, grease or any loose scale that would restrict the penetrant from doing its work or give out false indications are eliminated. The cleaning methods involve alkaline cleaning steps, vapour reading, media blasting or solvents. You have to take a note here that if media blasting is used, it will work on small discontinuities, and an etching bath is necessary after the process is completed.

b) Application of the penetrants - After the completion of the first step, the penetrant is applied to the surface of the material. The penetrant allows " dwell time" to soak into any defects, usually up to five to thirty minutes. However, it is evident that minor flaws need a long penetration time. Also, because of their incompatibility, you have to take care of the application of solvent-based penetrate to a surface that has to be examined with washable water penetration.

c) Removal of excess penetration - Now, the excess entrant that has been present on the surface area of the material needs to be removed. Here, the removal method depends on the type of penetrants being used, such as solvent-removal, water washable, lipophilic post-emulsifiable, or hydrophilic post-emulsifiable are some of the penetrants. If the excess penetrant is not removed and the developer is applied, then it can result in masking up the indications or flaws. Additionally, this may also result in generating unreliable indications, which possess an unfair impact on the entire testing procedure.

d) Application of the developer - After the removal of the excess penetrant, a white developer base is applied to the surface of the element. There are numerous types of developers available such as dry powder, water suspendable, water-soluble, and non-aqueous wet developers. The developer helps in drawing out the penetrant from the defects present on the surface to curate an indication that is clearly visible, which is commonly known as bleed-out. Any area of the material that bleeds out indicates the orientation, location, and possible types of flaws that are existing on the surface. Also, analyzing the defects from the indications may require some experience and training in this particular field.

e) Inspection of the material - The inspector will have to use visible light with adequate intensity (1100 lux or 100-foot candles is typical) for making the dye penetrant visible. Ultraviolet radiation of sufficient intensity (1,000 microwatts per centimeter squared is common) accompanied with low ambient light levels(less than 2-foot candles) for fluorescent penetrant inspection. The inspection needs to get started after a 25-30 minute development time. Blotting action occurs during this time, then the inspector observes the indications as they appear on the surface due to the traits of the significant area of interpretation and characterization of defects.

f) Cleaning after the procedure is done - The surface of the material is cleaned after the dye penetrant testing is completed, and collecting the data of the flaws is done.

1. Highly Portable and are easily available in aerosol spray cans.

2. Cost-effective as the materials and equipment that are correlated to the dye penetration test are economical.

4. Dye penetration testing can be performed really quick and can cover large areas without any trouble.

5. This method is suitable for a wide variety of materials.

6. High sensitivity as this technique can detect even the most minor flaws skillfully.

7. A visual representation of the defect is obtained with the indications present on the surface of the material.

2. This particular method is only limited to identifying flaws present on the surface.

3. The surface finish of the material can be responsible for affecting the sensitivity.

5. So many steps needed to be performed and controlled in order to reach the end goal.

6. Cleaning the material before starting the inspection process can actually hide some of the defects.

7. The examiner of the material must have direct access to the surface area that has to be inspected.

Stay ahead of the curve. Get in touch with OSNDT experts and get all your doubts as well as queries regarding Dye Penetration Testing cleared.