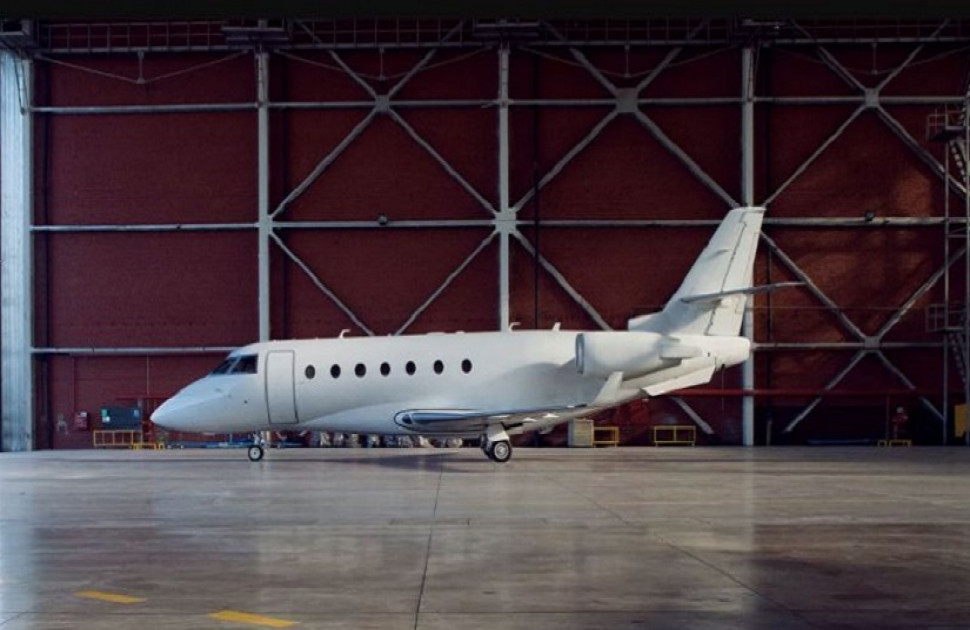 Edward “Ed” P. Dukich is an NDT Level III with over 40 years’ experience in the aviation industry. When it comes to aircraft inspections and certification training, his instrument of choice is our NORTEC™ 600 eddy current flaw detector.

Read on to learn more about his impressive NDT career and why he favors the flaw detector for aircraft inspections and skills training.

Ed got his start in the aviation industry after enlisting in the US Air Force in early 1974, toward the end of the Vietnam War, as an aircraft mechanic on a KC-135A tanker aircraft. He later worked as a final inspector in the major assembly division at the Grumman Aerospace factory in the late-80s. By 1990, Ed had shifted from the defense aircraft industry to work in corporate aviation at Garrett Aviation in Long Island, New York.

Following an economic downturn, Ed went to work for Lockheed Commercial Aircraft where he did NDT inspections on Boeing 747 C and D checks and Section 41 modifications. From there, he went off to Saudi Arabia for three years to a multinational workforce for the Saudi Aramco Oil Company. He returned to Long Island in 1995, and after a year with Tower Air inspecting 747s, started his own consulting firm: NDT Level III Resources. The firm provides services of inspections, auditing, training, and certification testing.

Specializing in the aviation industry and assisting aviation companies in manufacturing, overhaul, and in-service operation, Ed performs an extensive amount of eddy current inspections on aircraft, the vast majority of which involve localized damage evaluation.

The NORTECTM 600 eddy current flaw detector is Ed’s go-to instrument for both his inspection and certification training.

Ed explained, “The NORTEC 600, as well as the previous generation models (NORTEC 500, NORTEC 2000, NDT-24, NDT-19eII), were and still are the most user-friendly instruments on the market. Additionally, they have always incorporated full authority variable controls.”

We recently had the opportunity to chat with Ed to learn more about his journey as an NDT Level III specialized in aviation and how he uses the NORTEC 600 flaw detector. He also has recently incorporated inspecting welds with the Olympus welding probe kit with the NORTEC 600 instrument in his eddy current training curriculum.

Over the years, Ed has logged over 700 hours of technical training. Aircraft on the frontline is typically maintained after a set number of flying hours or landings to ensure pilot safety, mission success, and to keep the aircraft in the air.

A typical heavy inspection is broken up into phases and can involve:

Aviation inspectors must be familiar with multiple nondestructive technologies. Nondestructive testing (NDT) is an essential part of any ongoing maintenance program for aging aircraft. During aircraft manufacturing and maintenance, critical components are inspected to ensure that they are operating correctly. NDT is a cost-effective way to check aircraft components and structures for defects without having to remove components from the aircraft. These defects include stress cracking, fatigue cracking, corrosion, disbonds, and delaminations.

Eddy current testing, also known as ECT, is an NDT method based on the principle of electromagnetic induction used to detect and characterize flaws in conductive materials. High-frequency ECT (HFEC) is sensitive to small cracks and can quickly detect surface and near-surface defects.

Aircraft are constructed using thousands of bolts and fasteners. The fastener holes are a critical zone for structural integrity testing, as the metal around these bolts is susceptible to stress cracking. Consequently, aircraft manufacturers routinely recommend crack detection using ECT. HFEC is used for surface crack detection as well as aluminum conductivity measurements for the detection of heat treat and hardness conditions, such as overheating and fire damage.

Ed’s initial introduction to ECT came about while working as a structural inspector with Grumman. His initial training came into play when he was presented with a situation where a US Navy E-2C aircraft model had added near to 40,000 lb. (~18 tons) of weight in electronics but did not reinforce the airframe. Structural cracks were appearing in the center wing sections of the aircraft due to the additional payload. As a result, there was a need for eddy current inspection to be done on the aircraft’s fastener holes.

Aircraft are constructed using thousands of fasteners and bolts; these components must be routinely inspected to ensure the aircraft’s structural safety.

Throughout his years in the aviation industry, Ed has worked on various aircraft models.

“I’ve been involved with the E-2C [Hawkeye] with Grumman, the F-14 Tomcat fighter, the A-6 Intruder, the [Boeing] 747,” Ed said. “When I went to Garrett, their operation was focused on small business jet engines doing internal component inspection during the heavy overhaul, where they would literally disassemble every part of the engine, and then I would get a rack of parts to go through to do the required dimensional, visual, and subsequent inspections, inspecting the rework as necessary.”

All aircraft manufacturers, either civilian or military, are required to have an NDT inspection program (NDI) for each manufactured aircraft and must follow service checks based on manufacturers’ knowledge of the aircraft structure performances. NDI program documents offer direction on what NDT method to use and the equipment requirements (instruments, probes, transducers, and supporting reference standards). The aircraft operators or maintenance shops follow the procedures to inspect components or structures listed in the NDI program.

ECT has many benefits. An eddy current probe, paired with an eddy current flaw detector, can provide aircraft manufacturers with an economical and effective method to inspect critical aircraft components before they go back into service. In many cases, the paint or coatings (up to a certain thickness), don’t have to be removed before inspection; this amounts to a huge time savings.

A versatile and easy-to-use eddy current flaw detector like the NORTEC 600 instrument is important to help complete the inspection job thoroughly and efficiently so that the aircraft can safely continue to operate and is not grounded unnecessarily.

The Olympus NORTEC is the only instrument that I know of that has complete authority adjustments for both the vertical and horizontal gain controls, as well as full authority low-pass and high-pass filter adjustments,” said Ed. “The instrument is rugged and easy to use, the menu structure is friendly—I could get somebody up and running on it in an hour.”

“For the Olympus eddy current probes, I love the MiniMite™, and I still use the RA-2000 [rotating scanner],” said Ed. “I don’t know that there are any unusual tight configurations or constricted geometries I haven’t been able to get into with the RA-2000.”

Given that the NORTEC eddy current instrument is portable (it weighs about 1.7 kg or 3.75 lb.), it is easy to transport. This makes it a more economical NDT method—a major benefit for the aircraft industry.

Aircraft manufacturers’ in-service NDT procedures often include the most economical NDT methods, mostly because they don’t want their aircraft to be put out of service. When this happens, specialized personnel and/or a larger system is required to be flown in, or the aircraft must be moved to inspect it.

“Cost is a major concern with business aircraft, particularly the charter services, which there are a lot of right now,” Ed explained.

Recently, there has been an increase in business charter flights as social distancing practices continue. With the decrease in commercial airline flights (which people often don’t realize also carry a lot of freight), companies are chartering airplanes so they can move additional cargo and transport parts to their manufacturing facilities to keep production going.

As a Level III consultant, Ed has been hired and outsourced to work with several companies to serve their inspection, auditing, and training purposes.

“I have been the Level III for many places—propeller, wheel and brake, several overhaul shops, and a number of flight operations. They all have their own certification process. I also take a lot of exams,” said Ed.

He continued, “I also train all three Levels. I do Level III refresher courses, Level I and II training courses as required, independently, or I’m actually outsourced as the Level III for a company based on industry specifications.”

Many companies do outsource their NDT. So to bring somebody like Ed in, the company essentially umbrellas him with the responsibility of inspecting documentation and certifying whether the aircraft is airworthy and can be put back in service.

“These companies are paying for the [aircraft maintenance] knowledge,” he said. “As a Level III, you’re getting paid to be right. You cannot get involved as a Level III in NDT and skirt quality assurance issues.”

As an NDT Level III inspector, Ed is often called out to a job with no real guidelines. When an aircraft manufacturer has a nondestructive requirement for one of its aircraft, it turns to the engineering team to develop an inspection procedure. Ed often works with engineering to help them determine the best inspection method. He does impromptu damage type inspections and timed inspections.

“Just when you thought you’ve seen it all, you see something different, and so every job is a learning experience,” said Ed. “95% of airplanes are still metal. However, with the newer ones that have come out in the last 10–15 years, everything is getting thinner and lighter. Materials of different alloys, aluminum lithium, mixed use, and magnesium (as found in helicopter transmission housings, for example), composites—you need to know what you are looking at.”

Knowledge of material fabrication and finishing processes as well as fit, form, and function are important factors to be considered to perform an accurate appraisal of what might be found.

Ed elaborated on this some more, offering, “Things are getting lighter and thinner due to the fuel burn economy, and so NDT is becoming even more necessary. On metal-aluminum aircraft, even just surface scratches on the aircraft’s skin can cause alarm. Metals expand and contract with severe temperature changes and could be coupled with environmental conditions such as vibrations and pressurization.”

For inspections, Ed must do what the NDI aircraft maintenance manual says but carries the equipment needed to perform additional inspections.

“Not one NDT method is the end all. You may want to evaluate your findings with another method for accurate confirmation. The last thing you want to do is ground somebody’s airplane,” Ed said. “The idea is to keep the aircraft flying. They don’t make money when they’re on the ground.”

However, the primary mission is always to find the defects when they are small—before they cause a safety concern. Using good equipment coupled with skillful implementation and experienced interpretation of test results is absolutely necessary.

“There are jobs that require a certain amount of integrity, responsibility, and legal liability,” said Ed. “It’s always up to the integrity of the inspection equipment operator to be knowledgeable enough to see a discontinuity that might be detrimental, or to document something they don’t recognize to get a further evaluation on it.”