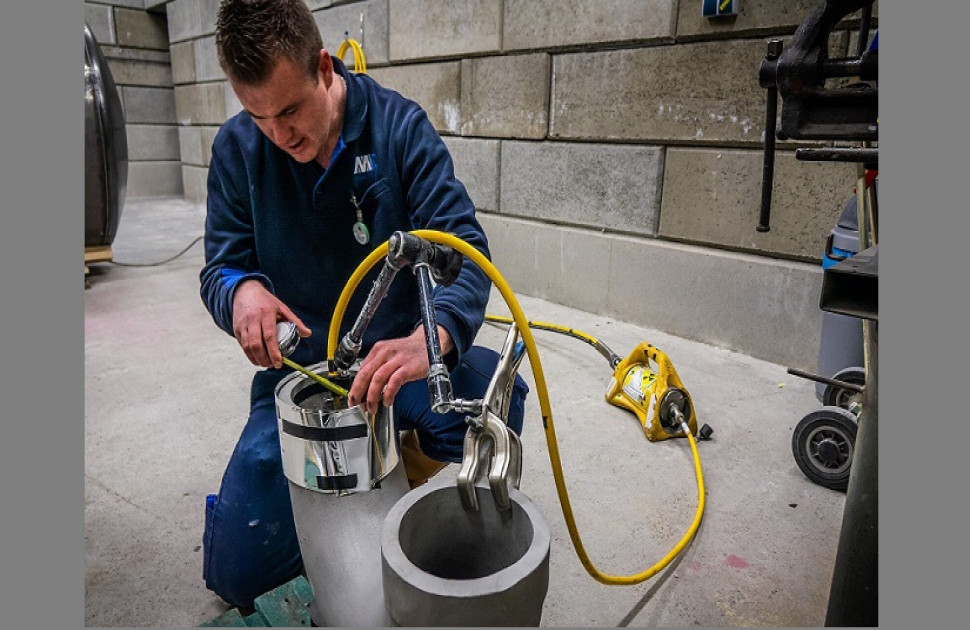 Amongst the Non-destructive testing methods, Radiographic testing procedures are used to detect any flaws or defects in the core structure of any machine or its components. The radiography test procedure makes use of either of the two rays that are x-rays or the gamma rays to create a radiograph of the test sample that indicates if there are any deviations in thickness, faults, or defects and assembly specifics to make certain optimal conditions.

In the Radiography test procedure, the component to be tested is put between the source of radiation and a detector that is a film. The variation in the density of the material and its thickness will reduce the piercing radiation with the help of interaction processes involving dispersion and/or absorption.

This variation in absorption is then documented on the film or with the aid of an electric device. There are various imaging techniques available specifically for use in industrial radiography that includes Computed Tomography (CT), Film Radiography, Computed Radiography (CR), Real-Time Radiography (RTR), and Digital Radiography (DR).

Computed Tomography (CT) is an advanced technique used in Non-destructive testing that is lab-based. It utilizes Radiographic Testing Principles that give both three-dimensional volume images and cross-sectional images of the test component that requires to be assessed exclusively of intrinsic overlay associated with two-dimensional radiography. This specific attribute permits a thorough examination of the core structure of an extensive range of components.

Radiographic testing procedures are widely used in testing the quality of welds in the industry. Radiography test procedure in welding is a majorly reliable testing method to identify flaws or defects in the weld such as voids, porosity, cracks, inclusions, and so on inside the weld.

Due to the high reliability and trustworthiness of the Radiographic testing procedures, they are used across various industries that comprise automotive, offshore, power generation, aerospace, manufacturing, transport, oil and gas, petrochemical, marine, and military.

The process of Radiographic Testing was uncovered by William Roentgen in 1895. It was soon applicable in the area of medicine and consequently used for industrial components. to It is based on Radiographic Testing Principle that radiation is dispersed and absorbed by an object as it goes across it. Depending on the differences in density or thickness because of the flaw in the component, less or more radiation moves across and has an effect on the film exposure. These flaws can be observed in the film, generally in the form of dark spots.

In Radiographic testing procedures, the portion of the machine or the components is placed between the radiation source and a part of the sensitive detector or film. As soon as the radiation is initiated in the form of an x-ray or gamma-ray, the part that is being tested will obstruct some of the radiation by its material thickness and density. Denser and thicker material will reduce the amount of radiation that will pass through the sample.

An electronic device or a film will note the amount of radiation which is known as a radiograph. The radiograph contacts the film with the help of the test sample. The data obtained from the radiograph will enable the technician to identify the defects easily. In case the component is in a good shape, without any flaws, the radiation will uniformly pass across the material. The flawed material will absorb some amount of the radiation that goes through it due to a change in density.

Any kind of defect in the source metal will lessen its density. Therefore, it transfers radiation in a better manner than a sound metal. Consequently, the radiograph film seems to be darker at the part subjected to any defects.

The power of penetration of the rays is reliant on the energy of the radiation. The high-energy radiation will be more likely to able to penetrate denser and thicker material. To ensure safety, local rules must be firmly obeyed as the high-energy gamma-ray and x-ray are extremely radioactive.

According to Radiographic Testing Principles, in radiographic testing, flaws are identified by utilizing the disparity in the thickness of the material. Accordingly, the greater the disparity, the easier it is to identify the flaws in the material being examined. Although, if the pathway if the rays are not in line with the crack, the disparity in the thickness is less and as a result, any cracks might go unidentified. Due to this reason, it is always recommended to carry out a Radiography test procedure by distributing rays at different angles.

The major drawback of the short wavelength radiation is ionizing that is they can bring about chemical shifts in the human body. All the ionizing radiation is unsafe as even a minimal amount can lead to genetic damage and strengthen the likelihood of cancer. Rigorous safety provisions are required while using the Radiography test procedure. This turns out to be rather disruptive, costly, and time-consuming.

Step 1: The first step focuses on the surface preparation that is any surface variabilities are to be removed so they do not hinder or mask the image as a flaw. The refined surface of all butt-welded joints should be cleansed with the base material.

Step 3: The third step involves choosing Penetrameter. As per the codes and regulations, either a whole type or a wire type penetrameter is required to be chosen.

Step 4: Once the penetrameter is selected. The technique used for the Radiography test procedure is determined. Generally, the single wall or double wall exposure technique is used. Additionally, the distance from the source to the object and the object to the source is required to be ascertained in advance.

Step 5: The defect is identified and removed. The radiograph should be examined for possible flaws or defects and fixed if a fault is detected.

Step 6: Lastly, the entire data obtained from the radiograph is recorded properly.

● Internal flaws can be verified on even complex structures or components.

● Accumulated constituents can simply be examined.

● The prerequisite for surface preparation is minimal.

● Both surface and subsurface defects can be identified.

● Constant test data can be acquired.

● Dimensions and angles of the test components can be assessed without segmenting them.

● The radiographic testing procedure is one of the best Non-destructive testing techniques instead of golden joints because it can be used for wide-ranging materials.

● It is highly hazardous for the operators and people around, so proper precautions must be taken.

● A good amount of experience and skills are required.

● The devices are relatively costly.

● It is usually a time-consuming process.

Conclusion: We, at One Stop NDT always strive to create awareness to the NDT Market (Equipment Manufacturers, service providers, distributors, plant operators, NDT professionals etc) about the New Development and products & Services availability in Global Market and to provide them with direct access to interact and explore on the possibilities of helping and working together.

Our team of experts is backed by professionals who have experience & presence of more than 20 years in the NDT market and have access to a large database /clientele who will be targeted/educated about your strengths/capabilities and give them a chance to freely communicate/interact with you and develop an interdependent relationship helping everyone to grow.