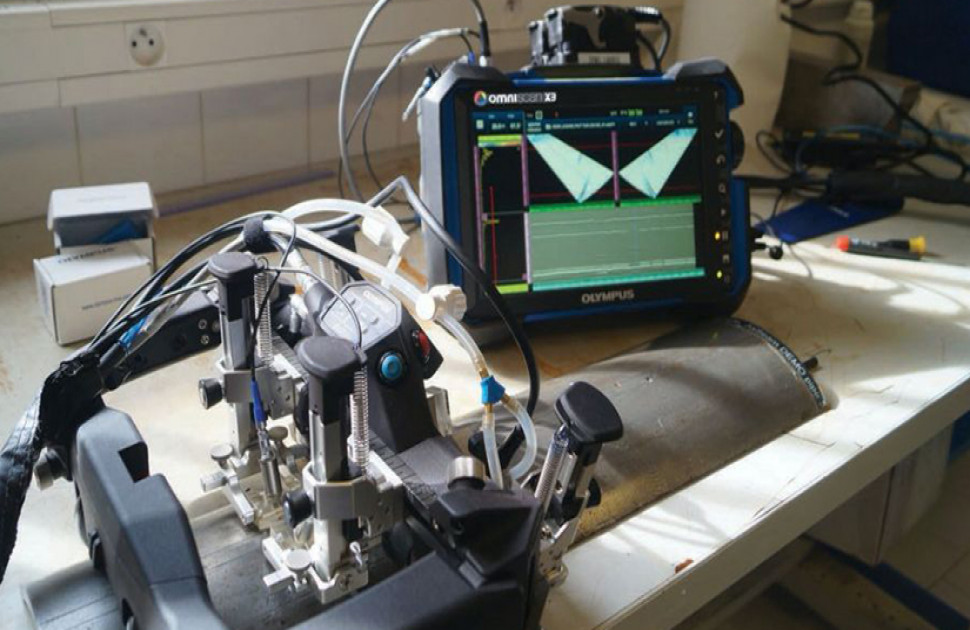 As a provider of engineering and maintenance services to nuclear power and petrochemical plants, Onet Technologies’ inspectors need portable and efficient ultrasonic testing (UT) equipment. And when inspecting complicated in-plant piping systems, the more multifunctional and compact their instruments are the better.

Onet Technologies already relies on Olympus’ portable OmniScan MX2 flaw detector. However, our NDT product specialist Benoit Cabirol suspected the company might benefit from some of our more recent innovations. Last fall, he loaned an AxSEAM™ scanner and OmniScan™ X3 phased array (PA) flaw detector to Onet’s R&D lab so they could test their potential advantages. 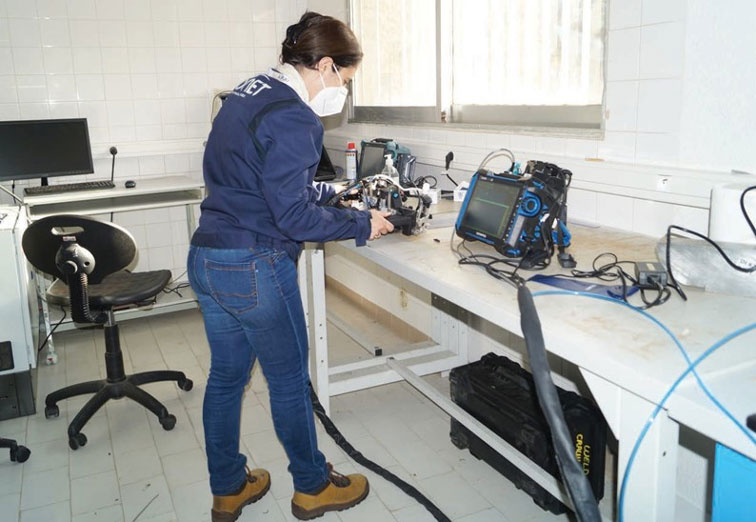 The following interview with Celia Chevallier appeared in issue no. 73 of Contrôles Essais Mesures (CEM) magazine (translated from French). Here, she discusses the equipment’s performance during the testing.

CEM: To what extent is Onet Technologies involved in weld inspection?

Celia Chevallier: Onet Technologies is committed to the excellence of the French and international nuclear industry. As an engineering and services company, our main mission is to support the nuclear industry stakeholders in developing, operating, maintaining safe conditions, or even the dismantling of nuclear facilities.

When we use inspection equipment in nuclear power plants, we need it to be portable and built for industrial applications—this also goes for the equipment we use for petrochemical inspections. The OmniScan X3 flaw detector could soon replace our OmniScan MX2 units, given its advanced functionalities.

CEM: Can you expand on that?

C. Chevallier: The TFM available on the OmniScan X3 flaw detector is a plus. Our experts are sometimes called upon to analyze defects on welds. This requires pushing techniques to the maximum and sometimes mixing complementary techniques. Having a device that offers the possibility of combining different techniques means that you don't have to bring several flaw-detection instruments with you. Also, the OmniScan X3 unit's user interface guides us, while leaving us free to choose our parameters, which we like.

“The warning lights…they tell us, without having to shift our focus, whether the coupling is good or not.”

CEM: Do you think the AxSEAM scanner could be helpful to you?

C. Chevallier: Yes, especially its integrated warning system. Normally, operators need to constantly check the inspection instrument's display to monitor the coupling of each probe. The warning lights visible on the ScanDeck module are very practical in that they tell us, without having to shift our focus, whether the coupling is good or not.

CEM: Are there any other features that convinced you?

C. Chevallier: The AxSEAM scanner appeals to us because it is easy to adjust and quick to set up—major advantages when we have to switch from one type of weld to another. This scanner enables us to check pipes of different thicknesses, while mitigating the difficulty of installing the probes. With the AxSEAM, this adjustment is quick and easy. Another detail that is important to me: the AxSEAM scanner has a brake so you can release your grip on it to remove a probe, for example. The laser guide is also an asset.

CEM: Onet Technologies and Olympus have worked together for a while. What sort of relationship do your companies have?

C. Chevallier: Onet Technologies has been an Olympus customer for many years. We appreciate Olympus products because they meet our expectations. Also, our Olympus collaborators know how to advise us and apply their expertise to meet our specific requests. For example, Olympus once mobilized their teams to design a particular probe holder for us that was not offered in the catalog.

For more information on these and Olympus’ other nondestructive testing (NDT) instruments, go to https://www.olympus-ims.com/en/all-products/.