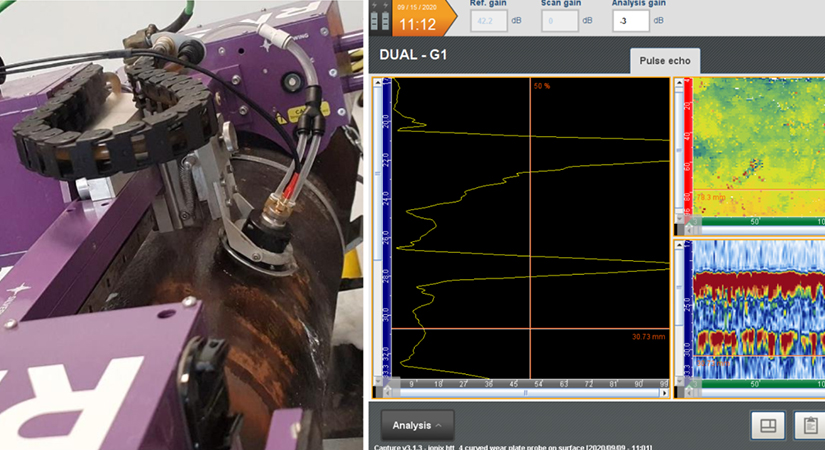 Ionix Advanced Technologies, experts in high-temperature in-service ultrasonic asset-integrity tools, evaluate the benefits and challenges of detecting and monitoring sulfidic corrosion, a ubiquitous damage mechanism in refineries, and how new technologies have emerged to meet the updated standards and best practices.

Sulfidic corrosion of steel in downstream refining assets is a ubiquitous damage mechanism occurring in sulfur containing crudes when heated between 230 °C and 425 °C [1], which is difficult to predict, costly to repair and has caused catastrophic ruptures in piping, tubing, pressure vessels and other refinery assets. Recent updates to recommended practices, require 100% inspection of components at risk, and those showing signs of accelerated corrosion necessitate monitoring. Recent advances in ultrasonic testing (UT) technology now allows for the inspection and continuous monitoring to be undertaken whilst the components are on-stream, at temperature, with high-resolution thickness data, removing the need for prior, or additional screening.

Corrosion in refineries and petrochemical plants can be split in to low- and high-temperature corrosion mechanisms around a critical temperature of ~ 260 °C / 500 °F [2], [3]. Sulfur compounds in hydrocarbon products, can react at high-temperatures with low-alloy, carbon and 300- & 400-series stainless steels.

High temperature sulfidation (sometimes termed sulfidic) corrosion is the most prevalent corrosion mechanism in the oil refining industry as nearly all crude oil feeds contain naturally occurring sulfur compounds, such as H2S and other reactive species. This makes sulfidation corrosion ubiquitous in all crude processing refineries, affecting large sections of the plant, and is of increased concern when processing opportunity crudes with increased TAN and sulfur content. In the absence of hydrogen, corrosion due to sulfur compounds in the crude is thought to occur at temperatures above 260 ºC / 500 °F, forming a surface sulfide (FeS) semi-passive scale and dissolved hydrogen in the steel which can then lead to hydrogen embrittlement. Up to that temperature, corrosion rates due to sulfidation are relatively low, except for when naphthenic acid is present, and above 500 °C can lead to sulfur diffusion in-to the metal, displacing carbides [1].

Sulfidation in iron-based alloys, the materials of construction for refinery components, often appears as uniform thinning (see Figure 1), but can also occur as localised corrosion high velocity erosion-corrosion damage, specifically horizontal piping, concentrated around elbows and bends [3]. Uniform thinning reduces the pressure containment envelope, affecting components such as piping, pipe fittings and pressure vessels including, heaters, boilers, cokers, distillation units and fluid catalytic crackers (FCC) [3], [4] and can lead to rupture failure rather than leaks from defects like pin-holes. Most industry incidents have occurred in piping, due to their lower nominal wall thicknesses compared to other components [5].

Where the damage causes subsequent ruptures, it has led to the catastrophic release of large quantities of hydrocarbon streams [5].

The rate and prevalence of sulfidation corrosion is dependent on factors such as materials of construction, sulfur concentration and species in the oil. The presence of hydrogen, increasing temperature and increased flow rate further accelerates the sulfidation, making it hard to predict accurately where and the rate at which it will occur. However, one predictor of higher sulfidation rates is low silicon content in carbon steel components.

This has led to manufacturing standards for high-temperature piping to specify a minimum silicon content [6]. As 95% of refineries in the US alone were built before these standards were introduced [5] and as a result of refinery failure investigations [5], the recommended practices from bodies such as the American Petroleum Institute (API) now require either identification of carbon steel hydrocarbon circuits that may contain low-silicon content or the replacement of carbon steel for costly alloy steels with increased resilience to sulfidation [7].

The determination of silicon content in existing carbon steel in the field is destructive, laboratory based and difficult. In response to this, non-destructive testing (NDT) is commonly performed to determine the remaining wall thickness of the components in contact with high-temperature hydrocarbons.

API guidelines for avoiding sulfidic corrosion failures in refineries states that any circuits identified as susceptible to sulfidation corrosion require 100% component inspection. Remaining wall thickness is to be determined by external ultrasonic thickness measurements and/or profile radiography, and where accelerated corrosion is found, designated as continuous monitoring locations (CMLs) until the components can be replaced [3].

Guided wave has been shown to be unreliable in determining 100% inspection and required follow up with other techniques [5].

The advantages of CR and EMAT wall thickness measurements are that they are non-contact techniques, that make inspection possible during the high-temperature service of the refinery components susceptible to sulfidation. The limitations in high equipment costs, portability, exclusion zones for radiation and isolation of process fluids for contrast (or limited pipe diameters) in CR and restricted penetration depth (limited wall thickness), size constraints and need for large magnetic fields (preventing scanning and inspection of non-magnetic steels) in EMAT however, result in areas of concern that have been identified by these screening methods still require high-resolution UT testing by conventional piezoelectric transducer technologies to be undertaken during scheduled outages or maintenance shutdowns.

Until recently, conventional UT, including automated or scanned UT (AUT) has been limited to temperatures <200 °C, below the threshold for sulfidation corrosion susceptibility. Advancements in new high-temperature piezoelectric ceramics, the electro-mechanical heart of an ultrasonic transducer [8], [9], and acoustic materials technologies have seen a revolution in corrosion detection and monitoring [10].

HotSense™, an extreme environment UT platform from Ionix, can now offer a low cost, conventional UT solution to replace CR [11] and EMAT methods for thickness measurements with the commercial availability of high-temperature ultrasonic transducers and couplants, operating up to 550 ºC without the need for cooling or duty cycling.

The HS582i, dual element transducer allows continuous measurements or scanning (with compatible magnetic crawlers or robotic scanners) for full coverage of refinery assets with in-depth inspections to determine the presence, location, and extent of any existing sulfidation corrosion damage, without the need for isolation of shutdown (Figure 2). HotSense™ enables operators and service providers to undertake 100 % inspection at a fraction of the cost and time without impacting productivity and can be started immediately by any asset integrity service provider competent in basic UT techniques, to identify areas of accelerated corrosion from sulfidation, or any damage mechanism.

The location of high-risk areas is a key step in the determination of CMLs, which can be subsequently monitored with installed ultrasonic transducers to trend corrosion rate, ultimately leading to asset and process intelligence that can be used to inform RBI strategies, fitness for service assessments, and defer or schedule appropriate maintenance.

The same HotSense™ high-temperature technology that has been implemented in UT tools for inspection, has also been used to offer ultrasonic corrosion monitoring transducers [8], [12]. HotSense™ monitoring transducers (Figure 3) can be installed under insulation to maintain weatherproofing integrity, are intrinsically safe for use in hazardous and explosive refinery atmospheres, and can relay wall thickness data, in real-time, in-service, and remotely (via wireless or cellular communication) in to existing servers, distributed control system (DCS) or other data historians. With fixed installations, removing variables such as user, couplant, location and hardware differences has allowed very high precision measurements [13]. More recently, Figure 3 shows HotSense™ continuous monitoring transducers which feature integrated calibration blocks/delay lines, which offer better temperature compensation and increased accuracy to be able to plot absolute wall thickness to 20 µm, and plot wall loss trending to better than 2 mpy.