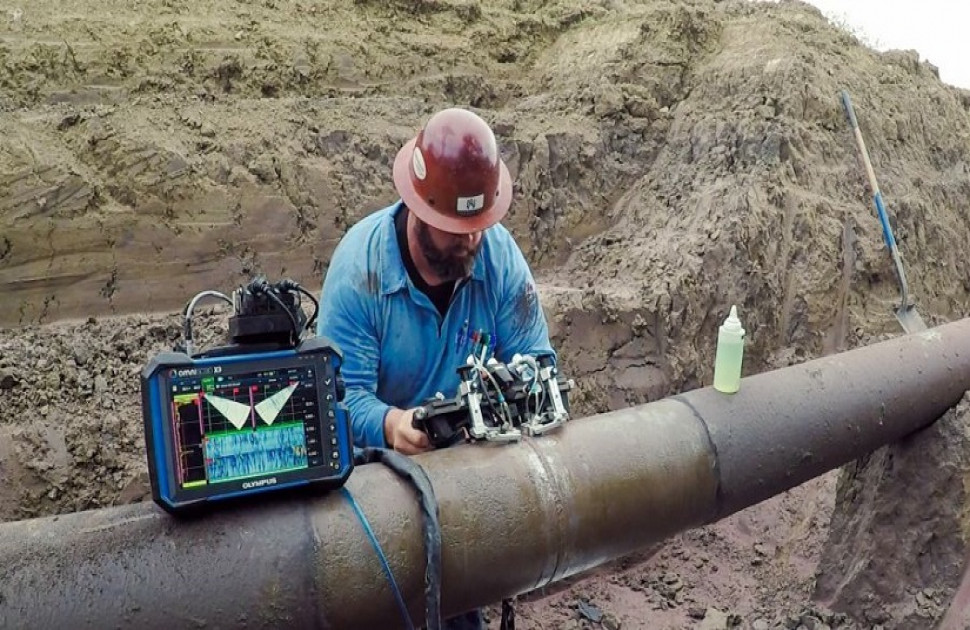 For Tim Robinson, CEO of Advanced NDT and Consulting (ANAC), earning his clients’ confidence through collaboration is key. In fact, it’s part of his company’s mission statement. Offering in-line inspection (ILI) validation and verification services as well as nondestructive testing (NDT) training—with offices in Oklahoma, Florida, and Minnesota—ANAC works with clients to ensure the integrity of pipelines or other components.

A Long-Term Relationship with Olympus Scanners

Tim, an NDT expert with many years’ experience in the field, is accustomed to using Olympus products. He has mastered many scanners, such as the AxSEAM™, MapROVER™, RollerFORM™, and FlexoFORM™scanners, using them with the OmniScan™ X3 flaw detector.

The AxSEAM scanner and the OmniScan™ X3 flaw detector

The AxSEAM™ was designed specifically for pipeline jobs, and it fits the mold great.

According to Tim, most NDT equipment tends to be “built for bigger facilities, turnarounds, refineries,” etc. In his discussions with Simon—Olympus’ product manager for scanners—and the team, he says he tried to impress upon them that the AxSEAM scanner be a tool “that can adjust to the pipeline world.” He’s satisfied that they got the message. The ways in which the AxSEAM scanner fits to pipe and adjusts to various diameters demonstrates that it’s a tool made specifically for pipelines. “The AxSEAM was designed specifically for pipeline jobs, and it fits the mold great.”

Putting the AxSEAM Scanner to the Test

ANAC purchased two AxSEAM scanners and conducted more than 200 scans with them over three months. I spoke with Tim, and he shared why he thinks using the AxSEAM scanner makes such a difference.

Up to the Challenge of Pipe Inspection

Tim says that where the AxSEAM scanner excels compared with the competition is its robustness. It’s essential for his inspectors to be able to do their jobs and not “have to worry about things like the equipment being brittle or weak and not feeling confident in that scan.” No one wants equipment that is faulty or breaks down during an inspection—and the robustness of the AxSEAM scanner instills Tim and his team with confidence.

Another characteristic that Tim says distinguishes the AxSEAM scanner is its smooth movement. He attributes this fluidity to the magnetic wheels, “they took the design from the FlexoFORM, and I really, really like the smoothness that the FlexoFORM scans with, and they put that into the AxSEAM scanner. So that smoothness in the scan itself is really a beneficial thing in the field.”

The Importance of Portability

In providing their inspection services, the company’s team of 25 technicians do a lot of traveling, so the amount of equipment that they transport with them is an important consideration. The fact that the AxSEAM scanner can be packed into one case is a major plus for Tim, “the less intrusive the equipment packaging, the better it is for our technicians, right? We’re traveling throughout the US. We have this equipment in our truck, and they have to take it in and out of the hotel. So, outside of the usage perspective, that's huge!”

He also likes that when in the field, his technicians aren’t mired in a lot of cases and crates, as is the case for some other similar equipment. “Just not having all the bulk of equipment laying around. You don’t have to worry about those side thoughts of damaging the equipment or things of that nature because you’re only dealing with a single box.”

Inspect Efficiently and Confidently with the ScanDeck™ Module

Without a doubt, the ScanDeck™ module is the favorite AxSEAM scanner feature for Tim. Its LED status indicators are a key reason the inspectors of Advanced NDT and Consulting have such confidence in this tool. “When they designed it and they put things like the water couplant indicator and the pulse repetition rate indicator on the actual scanner itself that allows the technician to focus more on the scan so he’s not having to worry am I going too fast, do I have enough water flowing and, therefore, he's getting the job done a little bit quicker.”

Regardless of the surface size or the number of inspections to perform, Tim is sure that his team will be faster with this scanner. “Anything that makes it a little bit more convenient in the field ultimately leads to cost savings for the clients and our job being a lot easier.”

The AxSEAM is just the latest and greatest invention Olympus has come up with.

Customer Service that Goes “Above and Beyond”

Throughout the course of his NDT career, Tim has done business with several manufacturers and used numerous instruments. He says that Olympus maintains excellent relationships with all its customers and really listens to them, at a level that he hasn’t experienced elsewhere. If he has the choice between two similar scanners, he says he would rather go to Olympus, “because Olympus’ customer care is above and beyond. They really make you feel like the customer is always right even though the customer is not always right, but they still hold to that old cliché.”

Will you buy from Olympus again? “Always… Unless it’s something Olympus doesn’t make or cannot provide me, I don’t buy equipment anywhere else anymore.”

The Most Important Benefit: ANAC’s Clients Save Money and Time

As an inspection service provider (ISP), the main reason that Tim likes the AxSEAM scanner is that it saves his clients time and money. “By being more efficient and effective and essentially quicker, there is a cost savings for the end user. They don't necessarily see it because there is still a dig crew that has to go and recoat the pipe or repair the pipe, but being able to get done with our part faster and getting out of the way provides them with a long-term cost savings.” And for Advanced NDT and Consulting, using the AxSEAM scanner enables the company to meet its objective of offering inspection services that are worthy of confidence.

Tim Robinson started his career in the NDT field in a small manufacturing facility in Pennsylvania performing MT and UT on ammunition parts for the government. Over the past 20 years, he has worked in many industries. In one place he was able to learn about wind and solar energy parts. At another, he inspected gears designed for many types of machines and submarines. In 2008, he started inspecting pipe and more specifically pipe seams. Since then, he has been focused on pipeline integrity and maintenance, helping the industry be safer and surer about the conditions of the pipe that lays beneath us. Today, he manages his own company, Advanced NDT and Consulting, and focuses primarily on pipeline integrity. Having seen the ups and downs over the last two decades, his company made the decision to offer NDT classes in all methods through multiple platforms to the public.