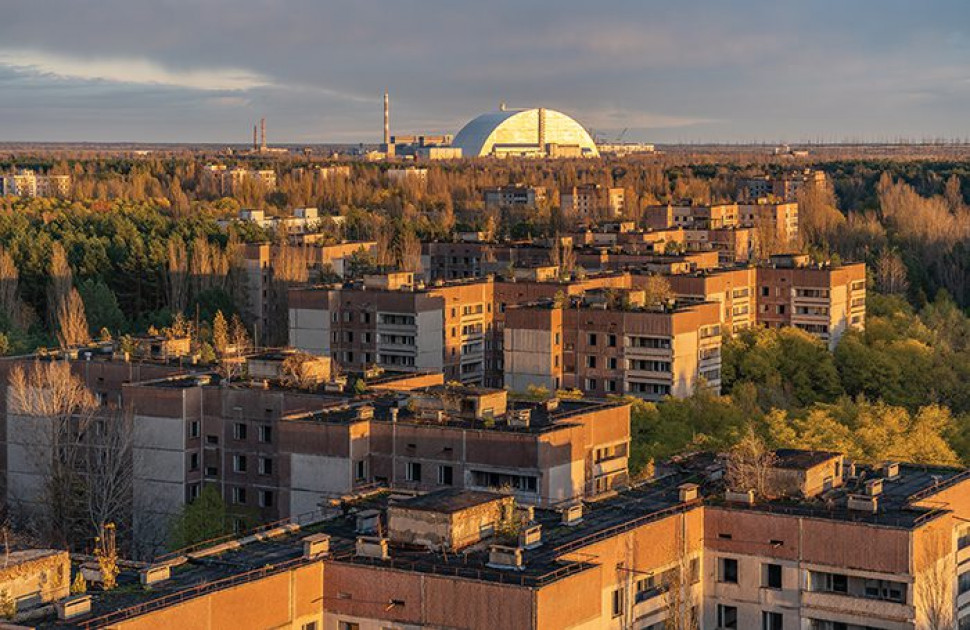 More than 35 years have passed since a steam explosion and fires at the Chernobyl nuclear power plant caused massive amounts of radioactive material to be released into the environment. Time seems to have stood still in the Exclusion Zone, with high radiation levels still persisting today. 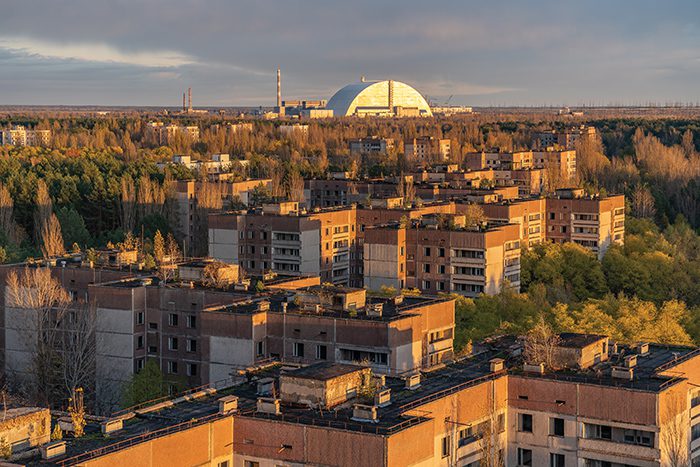 1. The Chernobyl nuclear power plant with its arch-shaped New Safe Confinement (NSC) structure is seen here behind the abandoned city of Pripyat, Ukraine. The NSC, which is 108 meters high, 162 meters long, and has a span of 257 meters, was built to prevent the release of contaminated material from the original sarcophagus, which was hastily constructed over the Unit 4 reactor building less than a year after the accident. The original structure deteriorated fairly quickly for a variety of reasons, but the NSC is expected to last at least 100 years. Source: Shutterstock

The TV series “Chernobyl” enlightened a whole new generation about the nuclear explosion that occurred in the early morning on April 26, 1986, at the Chernobyl Nuclear Power Plant in present-day Ukraine (Figure 1). Considered one of the worst nuclear disasters in history, the explosion led to fires, toxic fumes, and a massive radiation leak that left a lasting impact, including high radiation levels that persist today—more than 35 years later.

The Chernobyl accident and persistent high radiation levels in the local environment continue to attract scientists to the site, such as Dr. Peter Martin of the University of Bristol in the UK, who is studying the residual impacts experienced in the Chernobyl Exclusion Zone. The Exclusion Zone includes the land area contained in a 19-mile radius surrounding the Chernobyl Nuclear Power Plant—more than 1,000 square miles—that was most heavily affected by radiation and nuclear fallout from the explosion.

Martin is leading a project to measure and reduce radioactive contamination inside the zone, which was established shortly after the explosion in 1986 to help restrict access to hazardous areas and reduce the spread of radioactive contamination, that is, the presence of unwanted radioactive materials on an object or person. He and his team rely on smart and sometimes fascinating techniques and equipment to explore, monitor, and analyze the area and its remains while protecting themselves.

The View Inside the Chernobyl Exclusion Zone

While wildlife, color, and even some tourists are now beginning to return to the landscape, for the most part, it’s a distressing scene frozen in time (Figure 2). “Visiting the Chernobyl Exclusion Zone, it’s like everything has just stopped,” Martin said. “Most metal items are rusty. Abandoned vehicles are left on the road. It is quite somber.” 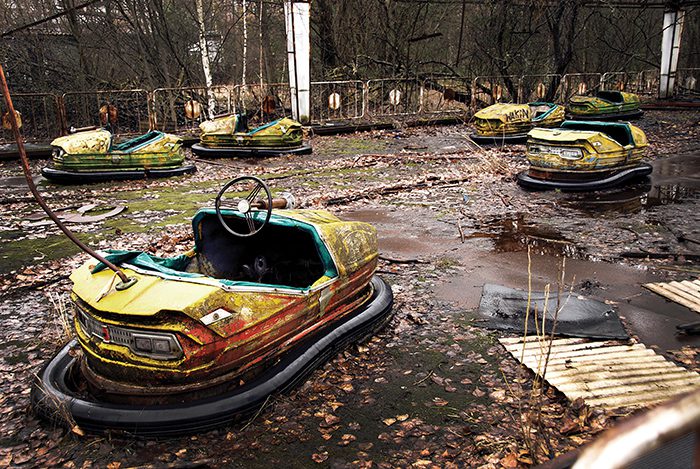 2. Pripyat, Ukraine, located within a few miles of the Chernobyl nuclear power plant, was founded in 1970 to house workers and support the facility. It had grown to a population of about 50,000 residents by the mid-1980s, nearly all of whom were evacuated within days following the accident on April 26, 1986. An amusement park, which was scheduled to have its official grand opening less than a week after the reactor meltdown occurred, has sat abandoned since that time, becoming an eerie symbol of the disaster. Source: Shutterstock

Cluttered by scattered metal bits, abandoned vehicles, construction materials, waste, and spilled fuel, many materials in the Exclusion Zone remain unknown and unstudied. The one certainty is that the area remains highly radioactive.

To monitor their exposure, researchers use dosimetry to measure radiation levels. Individuals wear many devices that send radiation exposure data to each organization involved in the study, including the university, the Exclusion Zone, and the Chernobyl plant itself. “Your dose is highly controlled,” Martin said.

Martin and his research team map the distribution of radiation at nuclear sites by looking at pipes of various diameters. They usually don’t know the contents of the pipes, what they were used for, or their level of radioactive contamination. It’s often all a mystery. 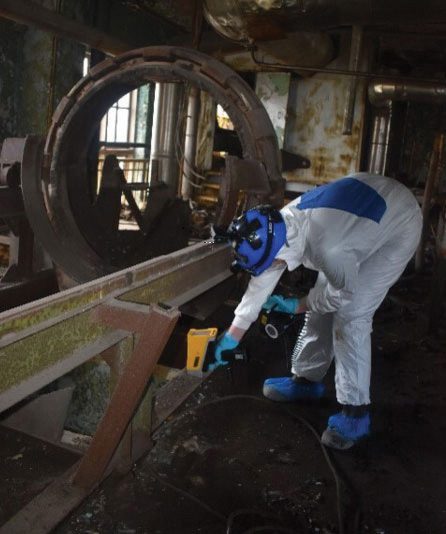 3. A handheld X-ray fluorescence (XRF) analyzer can be used to identify the material chemistry and alloys found in samples at the Chernobyl site. Obtaining lab-quality results in the field saves time and minimizes dose. Courtesy: Peter Martin/Yannick Verbelen, University of Bristol

To see what’s inside, researchers use equipment such as robotic dogs that can crawl into the pipes. They rely on handheld X-ray fluorescence (XRF) analyzers (Figure 3) to help sort and segregate contaminated materials onsite.

“XRF is very helpful to analyze material picked up for contamination monitoring,” Martin explained. “You need to get to extreme levels of radiation before it damages the electronic equipment. Anything outside of the reactor core is not constrained by radiation. In the heart of Chernobyl, they’re about to start the removal of the sarcophagus in the core. It’s still a radioactive place.” 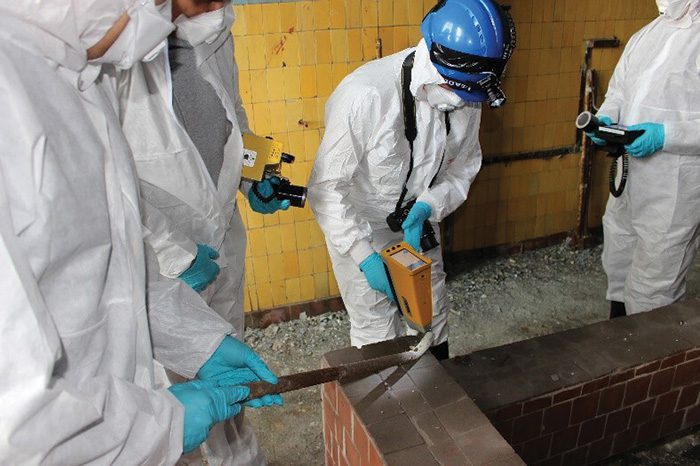 4. Determining the elemental composition of materials found at the Chernobyl site is made quick and easy with a handheld XRF analyzer. Courtesy: Peter Martin/Yannick Verbelen, University of Bristol

Specifically, Martin and his team selected Olympus’ Vanta handheld XRF analyzer to determine the elemental composition and presence of radioactive elements in the many items, surfaces, and soils they monitor at the Chernobyl site (Figure 4). The team typically performs about 100 analyses a day during a five-day visit. The tool allows immediate analysis onsite and therefore reduces the number of samples that must be mailed to the lab. Considering all the planning, logistics, and difficulty in shipping samples, the handheld analyzers are indispensable.

Martin and his team visit the Exclusion Zone twice a year. To measure the percentage of a given element, the researchers use a Vanta analyzer with three-beam GeoChem mode that allows measurement of various levels of concentration, for example, in parts per million (ppm) or in parts per thousand (ppt), as is needed for the element cesium. Researchers analyze various items onsite, including: 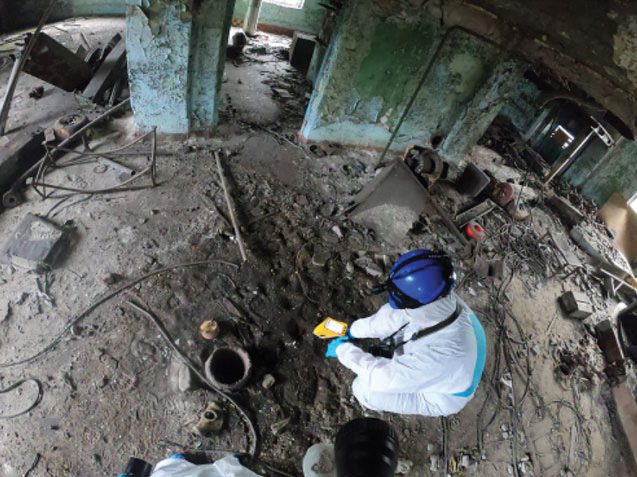 5. The XRF analyzer can be used for many purposes including scanning debris, soil, and other materials. Courtesy: Peter Martin/Yannick Verbelen, University of Bristol

To analyze the soil, the researchers dig down about a foot. Most of the radioactive contamination is retained in the upper portion of the soil. “Cesium sticks to the top few centimeters—clays retain the radiation. It is very sticky,” Martin said.

Handheld XRF analyzers allow field sampling on an array of items—from soil, rocks, steel, piping, and other building materials to cars and abandoned helicopters, which can’t be easily shipped. More extensive testing is sometimes completed on smaller samples shipped back to Martin’s UK laboratory. However, removing samples from the Exclusion Zone can be an onerous process, requiring up to nine months to complete in some cases including obtaining special permissions for contaminated samples.

Once permission is granted, items are shipped to Kiev, Ukraine, and then exported to the UK. Since radioactive material is classified as dangerous goods, the samples must travel on a special plane via cargo aircraft.

Preparing samples starts by placing soil samples in disposable petri dishes using sampling teaspoons. Researchers then put the samples on a flat surface to test them with the XRF analyzer. To test metal samples like piping and staircases, they hold the XRF analyzer directly up to the items.

Some of the key learnings have stemmed from testing items like gas masks and rain boots often found loosely buried in the soil. Researchers now know that those items hold onto the radioactive material because elements stick to them, especially cesium. According to Martin, the biggest learning has come from the smallest kind of sample.

“In the Kopachi area, the dosimeter will indicate especially high areas of radiation,” said Martin. “You can pick up grains of sand that are highly radioactive. We put this black sand on Kapton tape. The grains will give an entire year’s dose within 10 minutes,” he said.

“The grain is actually small bits of the reactor that were blown out in the accident and can still be found in the environment. Some sand grain pieces are made of graphite, carbon, and uranium,” explained Martin.

When a highly radioactive material like this is found, the team immobilizes and disposes of it at disposal sites made specifically for radioactive waste. “It’s mixed with a giant drum of concrete, and then they dispose of it,” Martin said.