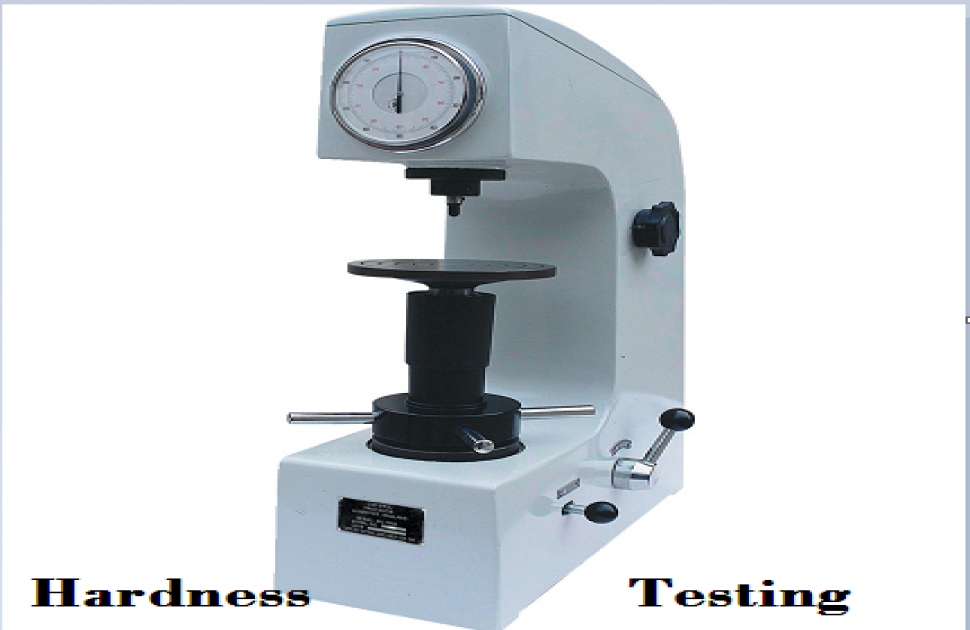 Hardness is the resistance of a material to localized deformation. The term can apply to deformation from indentation, scratching, cutting or bending. In metals, ceramics and most polymers, the deformation considered is plastic deformation of the surface.

For elastomers and some polymers, hardness is defined at the resistance to elastic deformation of the surface.

The lack of a fundamental definition indicates that hardness is not a basic property of a material, but rather a composite one with contributions from the yield strength, work hardening, true tensile strength, modulus, and others factors.

Hardness measurements are widely used for the quality control of materials because they are quick and considered to be nondestructive tests when the marks or indentations produced by the test are in low stress areas.

There are a large variety of methods used for determining the hardness of a substance, as can be seen below:

The most common methods are indicated below:

One of the oldest ways of measuring hardness was devised by the German mineralogist Friedrich Mohs in 1812. The Mohs hardness test involves observing whether a materials surface is scratched by a substance of known or defined hardness.

The numerical values to this physical properties are the minerals, ranked along with Mohs scale, composed of 10 minerals that have been given arbitrary hardness values. Mohs hardness test, facilitate the identification of minerals in the field, but is not suitable for accurately gauging the hardness of industrial materials such as steel or ceramics.

For engineering materials, a variety of instruments have been developed over the years to provide a precise measure of hardness. Many apply a load and measure the depth or size of the resulting indentation. Hardness can be measured on the macro-, micro- or nano- scale.

The oldest of the hardness testing methods in common use on engineering materials today is the Brinell hardness test, invented by Dr. J. A. Brinell in Sweden in 1900. The Brinell test uses a desktop machine to apply a specified load with a hardened sphere of a specified diameter.

The Brinell hardness number, or simply the Brinell number, is obtained by dividing the load used  (kg or pounds) by the measured surface area of the indentation, (in square millimeters or square pounds), left on the test surface.

A wide range of materials can be tested using a Brinell test simply by varying the test load and indenter ball size. Brinell testing is typically done on iron and steel castings using a 3000 Kg test force and a 10 mm diameter ball. A 1500 kilogram load is usually used for aluminum castings.

Copper, brass and thin stock are frequently tested using a 500 Kg test force and a 10 or 5 mm ball.  In Europe Brinell testing is done using a much wider range of forces and ball sizes and it is common  to perform Brinell tests on small parts using a 1 mm carbide ball and a test force as low as 1 kg.

The low load tests are commonly referred to as baby Brinell tests. A value reported as “60 HB 10/1500/30” means that a Brinell Hardness of 60 was obtained using a 10 mm diameter ball with a 1500 kilogram load applied for 30 seconds.

The Rockwell hardness test also uses a machine to apply a specific load and then measure the depth of the resulting impression. The indenter may either be a steel ball of some specified diameter or a spherical diamond-tipped cone of 120° angle and 0.2 mm tip radius, called brale.

A minor load of 10 kg is first applied, which causes a small initial penetration to seat the indenter and remove the effects of any surface irregularities. Then, the dial is set to zero and the major load is applied. Upon removal of the major load, the depth reading is taken while the minor load is still on.

The hardness number may then be read directly from the scale. The indenter and the test load used determine the hardness scale that is used (A, B, C, etc.).

For soft materials such as copper alloys, soft steel, and aluminum alloys a 1/16″ diameter steel ball is used with a 100-kilogram load and the hardness is read on the “B” scale.

In testing harder materials, hard cast iron and many steel alloys, a 120 degrees diamond cone is used with up to a 150 kilogram load and the hardness is read on the “C” scale.

There are several Rockwell scales other than the “B” & “C” scales, (which are called the  common scales). A properly reported Rockwell value will have the hardness number followed by “HR” (Hardness Rockwell) and the scale letter.

For example, 50 HRB indicates that the material has a hardness reading of 50 on the B scale.  The letters used in Rockwell scales are:

We provide Hardness Testing and all other mechanical testing services all over Tamilnadu.

Please feel free to reach us https://aqcinspection.com/training/ to learn more about any of the methods in detail.

Visit our technical and career updates at our Blog site https://advancedqualitycentre.blogspot.com . or