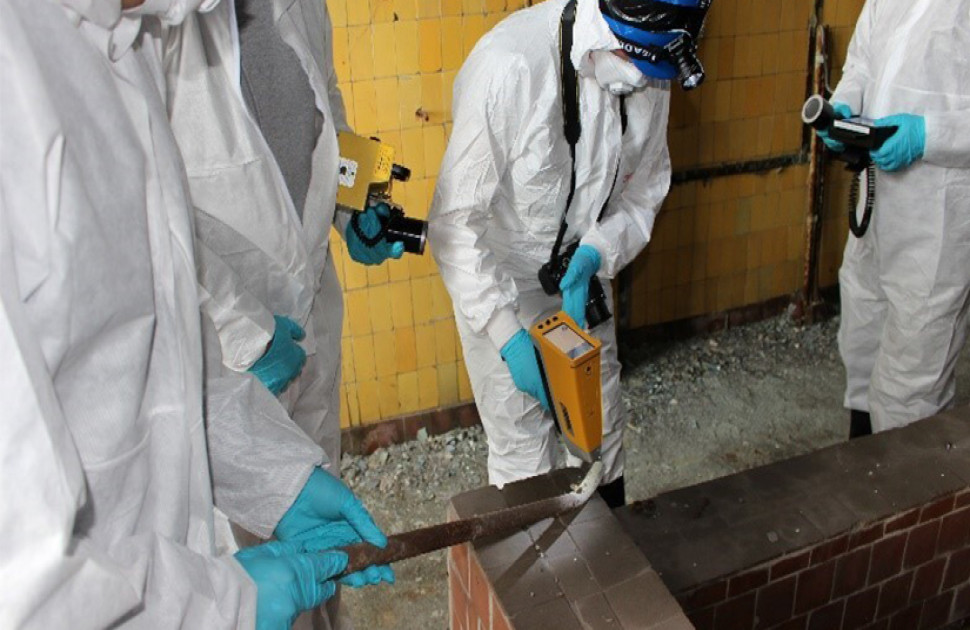 On the morning of April 26, 1986, a nuclear explosion occurred at the Chernobyl Nuclear Power Plant in present-day Ukraine that led to fires, toxic fumes, and a massive radiation leak. Considered one of the worst nuclear disasters in history, the Chernobyl accident continues to draw scientific interest to monitor the high radiation levels still in the environment.

One researcher working to study the contaminated areas from the accident is Dr. Peter Martin from the University of Bristol in the United Kingdom. He is part a project to use handheld XRF analyzers within the Chernobyl Exclusion Zone for radioactive contamination research and cleanup efforts.

We recently sat down with Peter to learn more about the Exclusion Zone, the research project, and how handheld XRF analysis helps them meet their goals.

What Is the Chernobyl Exclusion Zone?

The Chernobyl Exclusion Zone is a 19-mile area surrounding the Chernobyl Nuclear Power Plant that was most heavily affected by radiation and nuclear fallout from the explosion.

Established in 1986 soon after the disaster, the Zone helps restrict access to hazardous areas and reduces the spread of radioactive contamination (the presence of unwanted radioactive materials on an object or person).

Today, the Exclusion Zone is open to some tourists and is studied by researchers like Dr. Peter Martin. We asked Peter what the Zone is like now.

“Visiting the Chernobyl Exclusion Zone, it’s like everything has just stopped,” described Peter. “Most metal items are rusty. Wildlife has recovered. Color is starting to go back into nature. Abandoned vehicles are left on the road. It is quite somber.”

He explained that the area contains a lot of waste and construction materials. Filled with old bits of metal, abandoned vehicles, and spilled fuel—many materials in the Exclusion Zone remain unknown and unstudied. One thing they do know is that the area remains highly radioactive.

He explained the protective measures researchers follow to limit their radiation exposure.

“The researchers use dosimetry to measure radiation,” Peter said. “They actually wear many devices, one for each organization involved to measure the radiation exposure (the University, the Exclusion Zone, and the Chernobyl plant). Your dose is highly controlled.”

Mapping the Distribution of Radiation at Nuclear Sites

For the project, Peter and the other researchers are looking at pipes of various diameters at nuclear sites to map the distribution of radiation. However, they don’t know what’s inside them, what they were used for, or their level of radioactive contamination.

Because of their nuclear history, there are no plans to decommission the pipes. Instead, they use crawling robots to go into the pipes, such as the robot dog highlighted in this video:

Handheld XRF analyzers also play a critical role in this project as they help them sort and segregate the contaminated materials found on site.

The main goals of the Chernobyl project are to measure and reduce radioactive contamination, and handheld XRF has proven to be a useful device.

“XRF is very helpful to analyze material picked up for contamination monitoring,” Peter explained. “You need to get to extreme levels of radiation before it damages the electronic equipment. Anything outside of reactor core is not constrained by radiation. In the heart of Chernobyl, they’re about to start the removal of the sarcophagus in the core. It’s still a radioactive place.”

Peter and his team have been using the Vanta™ handheld XRF analyzer to monitor various items, surfaces, and soils at the Chernobyl site to determine the elemental composition and presence of radioactive elements.

The handheld XRF analyzer provides immediate in-field analysis, which means fewer samples need to be mailed to the lab. The team typically performs about 100 analyses a day during a 5-day visit. Considering all the planning, logistics, and the need to ship some samples back, Peter and his team visit the Exclusion Zone twice a year.

Peter and his team use a Vanta analyzer with 3-beam GeoChem mode to measure the percentage of a given element. Some items are measured in parts per million (ppm). The element cesium is particularly important, so they measure it in parts per thousand (ppt).

Some items analyzed include:

To analyze the soil, the researchers dig down 1 foot (0.3 m). Most of the radiation is retained in the top few inches.

Peter explained, “Cesium sticks to the top few centimeters—clays retain the radiation. It is very sticky.”

Thanks to their portability, handheld XRF analyzers are useful tools for measuring items on-site, such as soil, rocks, steel, building materials, cars, and metal sticking out of the ground. Many of the items tested can’t be sent back easily, such as abandoned helicopters and piping.

After field sampling, a smaller sample is brought back to the UK for more extensive testing. However, it is an onerous process to take samples outside the Exclusion Zone—it takes about 9 months to get samples out of Ukraine.

They’ve even had some samples stuck at the airport. Since radioactive material is classified as dangerous goods, the samples must travel on a special plane via cargo aircraft.

Further, they need to receive special permission to take contaminated samples from the Zone since removing these items is prohibited. Once permission is granted, items are shipped to Kiev, Ukraine and then exported to the UK.

Sample Prep and Disposal of Radioactive Items at Chernobyl

Peter’s team places soil samples in disposable Petri dishes with sampling teaspoons. Then they put the samples on a flat surface to test them with the XRF analyzer. For testing metal samples, they hold the XRF analyzer directly up to the metal for items like building materials, piping, and staircases.

Some of the more unique items tested include gas masks and rain boots—often found loosely buried in the soil. One thing they have learned is that those items hold onto the radioactive material. The elements stick to them, especially cesium.

We asked Peter about the most interesting thing they’ve found during their work.

“In the Kopachi area, the dosimeter will indicate especially high areas of radiation,” said Peter. “You can pick up grains of sand that are highly radioactive. We put this black sand on Kapton tape. The grains will give an entire year’s dose within 10 minutes.”

He explained, “The grain is actually small bits of the reactor that were blown out in the accident and can still be found in the environment. Some sand grain pieces are made of graphite, carbon, and uranium.”

When highly radioactive materials like this are found, the team immobilizes and disposes of it at radioactive waste disposal sites.

Peter explained, “It’s mixed with a giant drum of concrete, and then they dispose of it.”

Sincere thanks to Dr. Peter Martin and his team for sharing this information with the Olympus team.