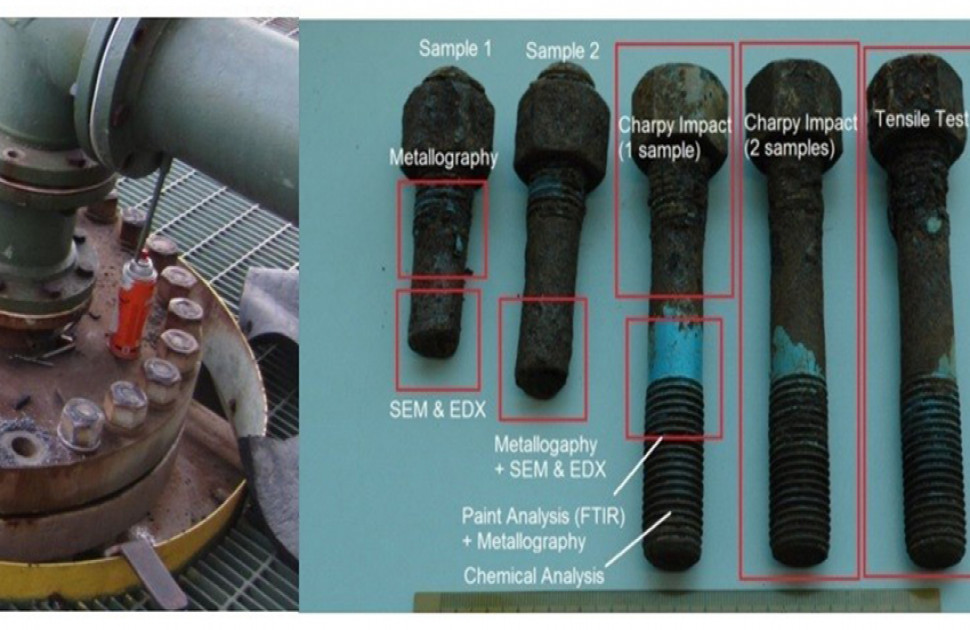 It is commonly reported that stud bolts fail abnormally before their design lifetime. A stud bolt on a pipeline flange, for example, can fail in less than two years, despite its design lifetime being significantly longer. As a result, engineers usually take a shortcut by constantly replacing it with a new stud bolt.

In this current case, the stud bolts installed on one of the offshore platforms in Malaysia also failed abnormally. Eight out of the sixteen stud bolts installed on the pipeline flange were parted and severely rusted within 1 year and 7 months of being in service after installation. Therefore, an investigation was conducted to determine the possible causes of stud bolt destruction. Chemical composition analysis, metallurgical and mechanical tests, and several other tests were performed on the failed, used, and kept samples. Bear in mind that the used stud bolt samples were installed approximately concurrently with the failed stud bolts and remain in good condition after being fastened to other flanges in the same location. Meanwhile, the kept sample is stud bolts from the same production batch, and it is kept by the fabricator. Therefore, both used and kept samples act as a reference. 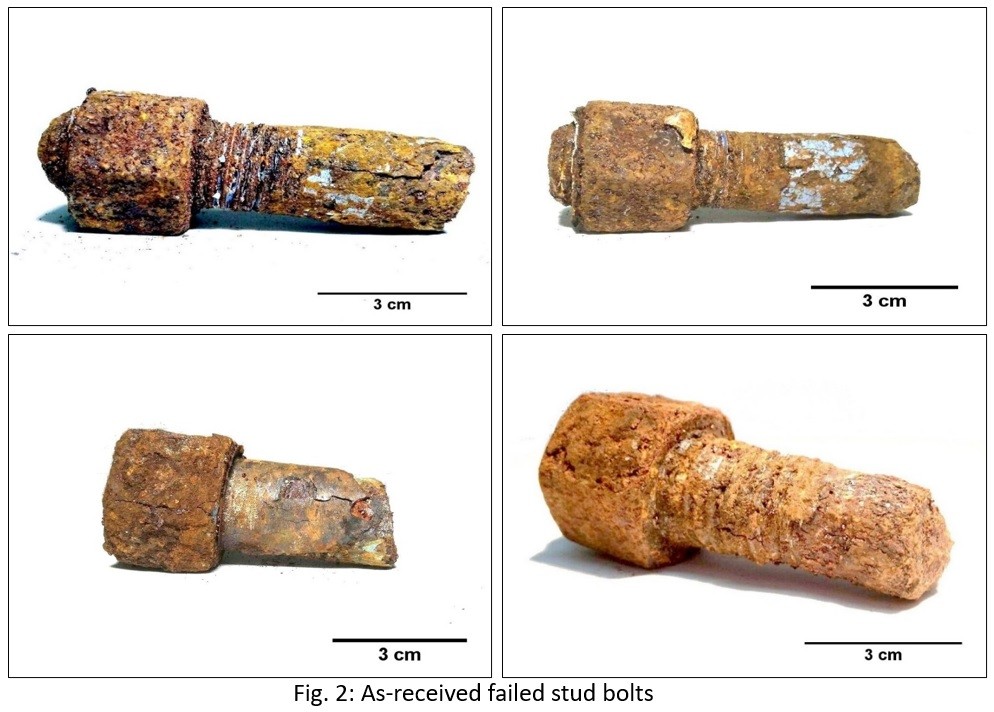 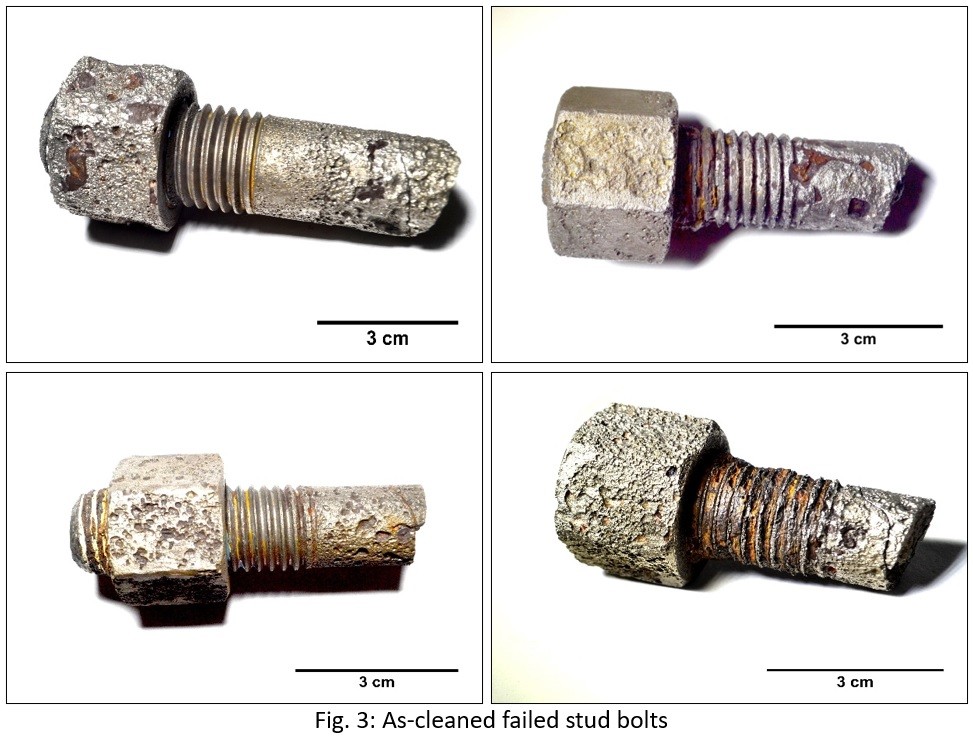 Optical emission spectroscopy (OES) analysis of both used and stored samples revealed that both materials met the chemical composition requirements of ASTM A320 grade L7 steel. On the other hand, tensile and Charpy impact tests show different mechanical properties. The used samples fully complied with ASTM A320 grade L7 type steel; otherwise, the data for the kept sample was scattered at the minimum ranges specification. Besides that, the coating thickness was within the acceptable range specified in the Fluoropolymer Coating for Fastener, Malaysia Project Design Specification. 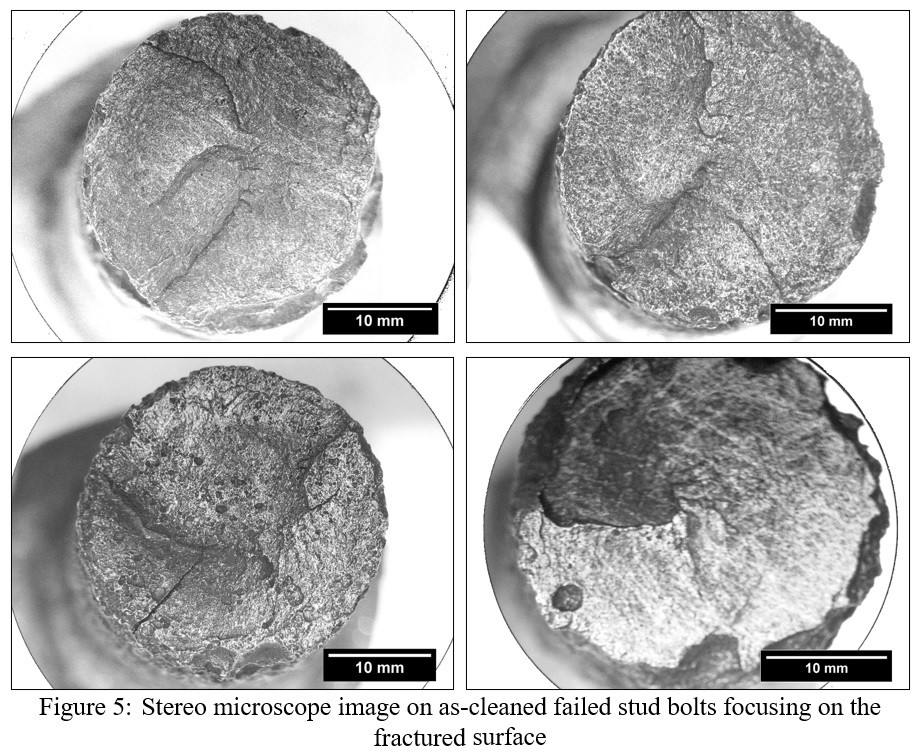 The failed stud bolt samples were severely corroded and parted with no visible necking. However, it is observed that some surface coating layers remained visible, indicating that corrosion under insulation occurred on the stud bolt. Wide and shallow pitting also can be seen, particularly near the fracture area. The parted stud bolts appear to occur in a brittle manner, as evidenced by a straight-line fracture in the 30 to 45o direction, indicating that the stud bold was over torsional during the tightening process. The microstructure for kept stud bolt consists of some ferrite in fine tempered martensite, whereas the structure for a used sample is ferrite and carbide (black) constituents in relatively large tempered martensite.

On the other hand, the microstructure for the failed stud bolt is identical to that of the kept sample. It mainly tempered martensite, forming cementite particles at the martensite lath boundaries and within the laths where the cracks propagated in a transgranular and branched manner. The presence of branched and transgranular cracking proves that the used sample suffered slightly residual stress and overload tightening.

According to the microstructure, cracking trend, and fracture pattern of the failed stud bolt, the root cause of failure is not due to corrosion attack problems, material or manufacturing defects, or a coating problem. On the contrary, it is strongly suspected that excessive torsional tightening caused a crack propagating inward and resulted in a defect in the coating layer, which then exposes the stud bolt to a corrosive environment.

As a recommendation, it is critical to ensure that threaded fasteners are tightened correctly and do not exceed the specified tightening torque. Second, the hardening heat treatment process for a stud bolt must be performed with care. The steel material does not have to be excessively hard. It can be heat treated by controlling the modulus and yield strength. A trace of ferrite phase in large tempered martensite containing carbide constituent is required, as demonstrated by the used stud bolt sample, to achieve fully compliant mechanical properties with ASTM A320 grade L7 type steel.