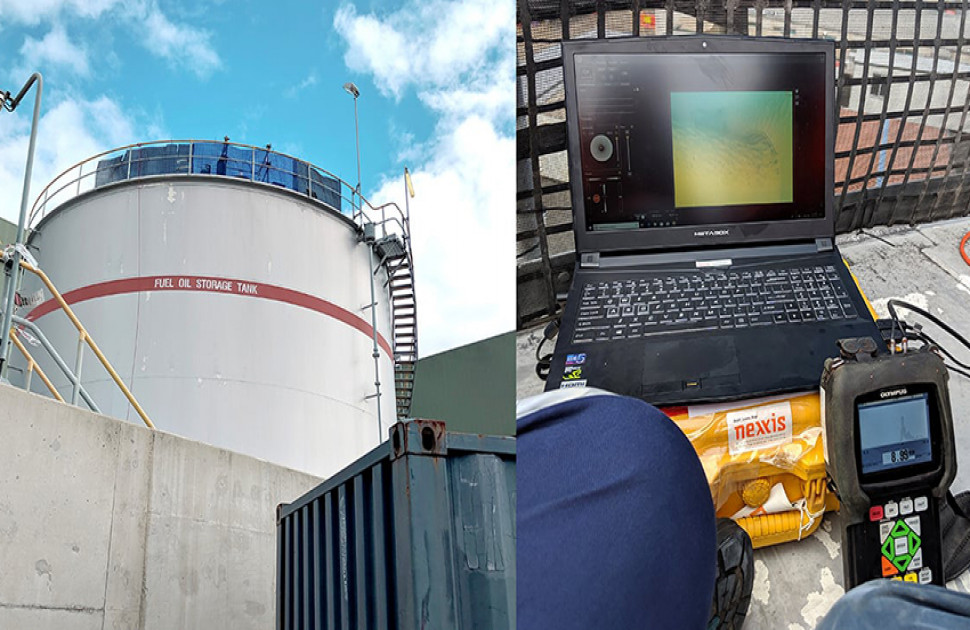 Carrying out diesel tank inspections has historically been a lengthy and expensive task. From loss of revenue through to extended shutdowns and the risk involved to human inspectors, finding a better method has, until now, remained an elusive dream.

There’s no secret as to the many problems faced when organising vital diesel tank inspections. In this case study, carried out at an oil depot in Switzerland, there was a need for 17 tanks to be surveyed as part of the legally-defined maintenance program. The tanks were old, having been built in the 1960s, with an expected lifespan of 50 years. Their longevity had exceeded this, meaning a requirement for frequent inspections every 3-5 years.

Up until now, internal inspections had been carried out by building 20 meter high scaffolding around each tank and inspectors entering to carry out visual inspections. This, of course, involved emptying the vessels to make them safe for human entry.

The whole process takes around two weeks when carried out in this traditional manner.

THE DIFFICULTIES AND DANGERS OF MANUAL INSPECTION

Such an inspection is fraught with multiple risks and other issues:

THE SOLUTION? REMOVE THE HUMAN ASPECT AND REDUCE INSPECTION TIME TO MERE HOURS

Despite many efforts over recent years to create a valid alternative to the above scenario, until now this hasn’t been possible to achieve.

The solution to the challenge was to use the Elios 2, an inspection drone created by Flyability specifically to address all of the issues of confined space inspection. This advanced, simple to use, tool has been designed to fly where no other drone can, inspect beyond the line of sight and have complete collision resilience.

Using the Elios 2 and with only minimal support from a drone pilot, oil depot inspectors were able to remotely inspect the complete internal area of each tank. Using a live video feed they benefited from high definition, close up views of the walls, welds, floor and roof – so producing an in-depth and accurate inspection report.

Some of the features of the Elios 2 include:

Despite the oil depot employees lack of experience flying drones, the ease of use of the Elios 2 meant that they were able to carry out the inspection with minimal intervention from the overseeing drone pilot.

The benefits of inspecting this way can be summarised as follows:

All of the above means that the company is considering increasing the frequency of inspections and therefore extending the lifespan of the tanks.

Advanced technology, such as the Elios 2, is something that equipment provider, Nexxis, is dedicated to bringing to their customers. Novel solutions, such as this, are what makes the Nexxis model so unique, whereby they don’t simply supply inspection tools – instead, they consider the business needs and provide a bespoke and flexible resolution utilising proven tech to address company requirements.

Get in touch for a no-obligation chat.