In most cases, in-line inspections follow a basic principle: what goes into the pipeline at one end must come out at the other. But sometimes it’s not quite that simple. In this specific case, the team from ROSEN Norway was contracted to inspect a crude oil line connecting an onshore terminal to a subsea pipeline end manifold. The main challenge: the asset could only be accessed using a single-entry approach. Read more about the solution our Norwegian experts developed in close collaboration with the customer in Trinidad and Tobago.

The pipeline to be inspected for corrosion is a 5-km-long, 30” crude oil loading line that runs from an onshore terminal on the southern tip of Trinidad to a subsea pipeline end manifold (PLEM). Because the line is not piggable by conventional means, the decision was made to inspect it using a tethered inspection tool with a single-entry approach from the terminal.

The line had been previously inspected by ROSEN Norway in 2016 with a system based on perpendicular beam ultrasonic testing (UT) for corrosion mapping and wall thickness measurement. While the 2016 inspection campaign provided useful measurement results, the quality of the collected UT data was impaired by hard wax and debris in the line. Therefore, the pipeline operator asked ROSEN Norway to develop a cleaning module that, as an integral part of the inspection tool, would be capable of improving the data quality.

The cleaning module development and build were successfully completed in 2020. Instead of a traditional cleaning tool, our experts opted for a cleaning module that slices up the debris locally without transporting or pushing it out of the pipeline, thus preparing the pipe wall for the inspection that follows right after.

In earlier days, ROSEN Norway generated a significant portion of their revenue by providing aggressive pipeline cleaning services to clients who had major problems with hard wax and scale deposits. Through technological developments, we learnt that when hard material adhered to the pipe wall, it was more efficient to cut it off rather than to use scraping tools. We also learned that when large amounts of such deposits were present, the loosened debris should not be pushed out of the pipeline but should go with the flow. The tools were therefore equipped with knife-like blades that could loosen thick scale in only one run. The invention of the tethered cleaning module was based on experience from previous cleaning services – at that time in combination with the type of deposits we observed when retrieving the tool from the line in Trinidad in 2016.

In February 2021, ROSEN Norway received the contract to prepare and execute the re-inspection of the 30” loading line.

A SOLUTION TO IMPROVE THE CLEANLINESS OF THE PIPELINE

Because the inspection tool used ultrasonic technology for the measurement, the cleanliness of the pipeline was of great importance. Based on experience from the first inspection in 2016, the main challenge for the UT measurement was identified as hard wax, mixed with other deposits, being present in the pipeline. The client had no possibility of cleaning the line with conventional cleaning pigs due to missing subsea pig receivers and did not have the option of reversing the flow for bi-directional (BiDi) pigging. Therefore, instead of cleaning the pipeline by bringing wax out of the line, the chosen approach was just to remove the hard wax off the pipe wall with a hydraulically activated cleaning module integrated into the tethered inspection tool. 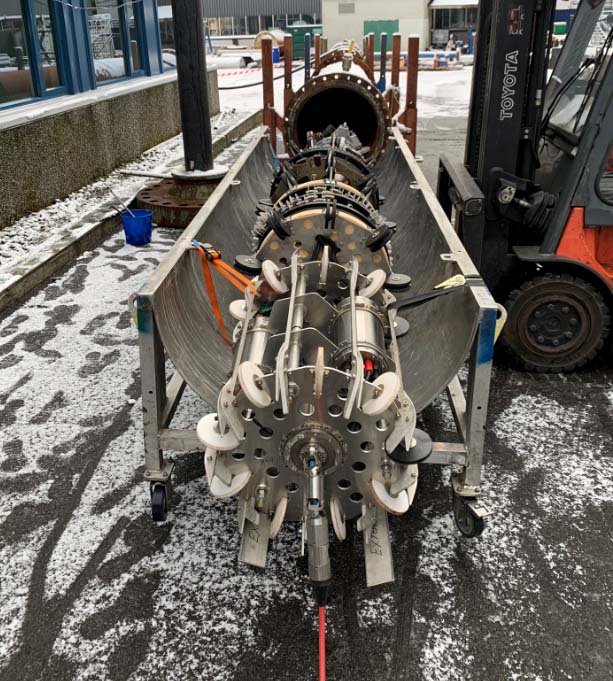 Test runs confirmed that the newly developed cleaning module reliably loosens brittle deposits off the pipe wall, resulting in improved data quality of the ultrasonic corrosion inspection measurement. However, before the actual run in Trinidad started, it was difficult to quantify how much the UT data quality would improve, as cleaning effectiveness depends on the physical properties of the debris (it works well with hard, brittle deposits). Another uncertainty was how much the cleaning module and accumulated debris would affect the pull-back forces required to retrieve the tethered tool from the run. The overall inspection tool train consisted of a tractor (to pull the tool into the line), a UT measurement system, the cleaning module and a Kevlar-reinforced umbilical cable connected to a powerful winch.

Due to the pandemic, it was – as with most projects nowadays – challenging and expensive to ship the equipment from Norway to Trinidad. It turned out that it would be even more challenging to have the inspection crew enter the country, as all Trinidad borders were closed and no commercial aircraft were allowed to bring passengers into the country. The only option was to charter a private plane and get an exemption from the Trinidad and Tobago government. Finally, we ended up booking an 80-seat plane from Curacao to Trinidad (Port of Spain) to bring the first four crew members into the country in early July. The same approach was used for the next three crew members about two weeks later. All of them had to go into a 14-day quarantine before they were allowed to start inspection work. Luckily, commercial air travel resumed a few weeks later and the crew could use regular airplane routes for their way home after the completion of the site work in August.

The tethered inspection tool was launched into the line from the onshore terminal in early August.

Figure 3 – The onshore terminal in Trinidad

It took almost five days to drive the tool to the end of the line. There was so much wax present that the propulsion wheels of the tractor slipped and the tool speed was very low. The online data visualization showed that the UT recording was working flawlessly; however, in some areas of the pipeline, the data quality was significantly reduced due to debris. For the inward run, the cleaning module had to be switched off because the tractor could not have pulled the tool with cleaning engaged. For the return run, the umbilical winch provided most of the propulsion, so the tool operator activated the cleaning module. The real-time data viewer revealed that the quality of data actually improved due to the cleaning of the pipe wall. By the end of Day 6, the tool was back in the launcher. A review of the data confirmed the positive effect of the cleaning module:

As seen in Table 1, the percentage of degraded data due to debris dropped by about 50% from the inward run (without cleaning) to the return run (with cleaning).

In addition to ROSEN’s standard data reporting, the client asked for further integrity services, including a corrosion growth analysis, which will be provided by our colleagues from the integrity team in Newcastle. Obviously, the accuracy and reliability of the outcome of this analysis depends very much on the quality of the input data (the inspection data). For this pipeline inspection, the newly developed cleaning module contributed greatly to our capability to deliver high-quality inspection data.

This project is another impressive example of how ROSEN’s Challenging Diagnostics (CDIA) division can provide solutions for apparently unsolvable problems: ultrasonic inspection of a pipeline with no flow and full of wax and debris without any means to clean the line before the run. ROSEN Norway’s tethered inspection systems are perfect for loading lines, and with the addition of the cleaning module, the negative impact of the debris could be minimized to achieve good inspection data quality.

Reliable information on the condition of this 30” line is crucial for the safe and efficient operation of the oil terminal and its tanker loading facilities. Avoiding costly modifications to the pipeline that would be required for conventional inspection tools and pipeline cleaning methods, the described inspection and cleaning approach delivers a clear benefit for the pipeline operator.