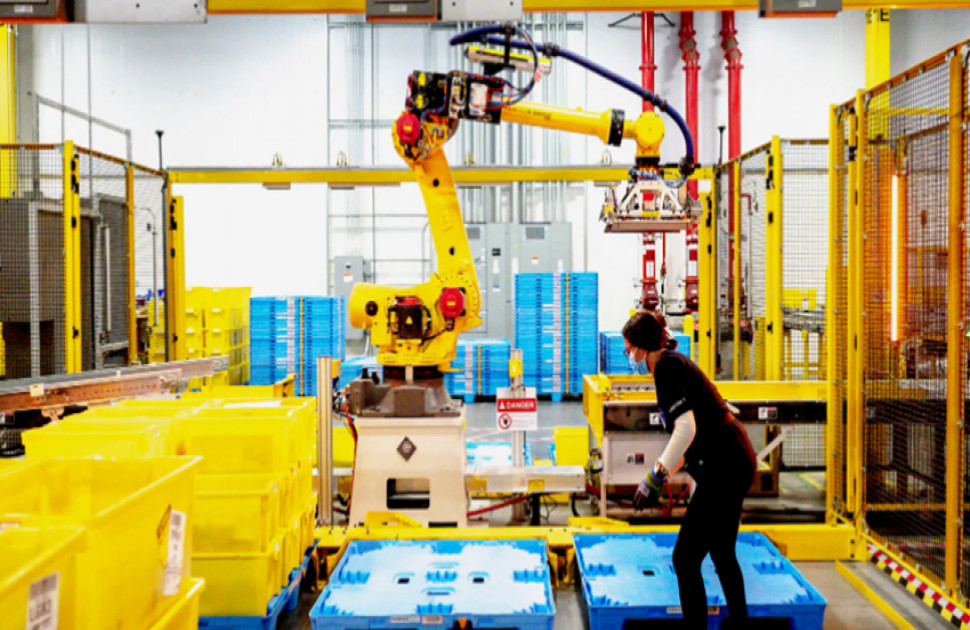 THIS JULY, AMAZON showed off several new warehouse robots with names borrowed from Sesame Street that are, presumably, meant to evoke childhood wonder rather than futuristic dread.

Bert, a wheeled robot about the size of a filing cabinet, navigates around a warehouse carrying products. Ernie, a large industrial robot arm, moves totes filled with packages from conveyors onto shelves. Scooter and Kermit are both intelligent forklifts, capable of pulling several carts or stacks of plastic totes from one side of a warehouse to another.

The new machines demonstrate the potential for automation to creep into more areas of warehouse and package-sorting work, a critical part of the economy as ecommerce orders soar. Competitors like Walmart and FedEx are also rushing to adopt robots. It might seem that machines are poised to take over in warehouses—and help make up for a dire shortage of human workers. The transportation and warehousing industries had a record 490,000 job openings in the US in July 2021, a shortfall that will be felt especially during the ordering and fulfillment crunch of Black Friday and Cyber Monday.

But not so fast. A rush to adopt more automation does not mean that artificial intelligence and robots will solve the worker shortage. Amazon’s prototype robots are not yet capable of doing the most challenging, and important, work inside its fulfillment centers: picking the many products stored on its shelves. They’re simply not smart enough.

Amazon has invested heavily in warehouse robots already. In 2012 it acquired Kiva Systems, a company that made robots capable of maneuvering shelves by scooting beneath and lifting them up. These robots follow markers on the floor and route shelves filled with hundreds of products to human workers who have to find the correct item in a bin. Amazon has since acquired more robotics firms, hired top robotics researchers, and funded challenges aimed at solving key problems in the field.

Some of the new bots, which have yet to be deployed, feature artificial intelligence for sensing and navigation, says Amazon spokesperson Kent Hollenbeck. The new mobile robots can navigate around human workers, for instance.

But the machines only automate work that requires limited intelligence, like avoiding obstacles or lifting heavy totes from a limited number of shelves. Amazon’s new robot arm, Ernie, will still need to be fenced off from human workers to avoid accidentally hurting them.

The role of robots across the economy is undoubtedly changing. For many years, robot jobs were limited to industries where labor-intensive, dangerous, and precisely repeated tasks were suitable for automation. The most significant adoption is in automotive manufacturing, where roughly 38 percent of all industrial robots are found.

The past decade has seen a shift towards safe, low-cost robot arms and mobile robots. And in recent years, some startups, such as Covariant, Osaro, RightHand Robotics, and others, are using a form of AI called machine learning to create machines capable of picking up a wider range of objects.

AI holds significant promise for making robots far more capable. Instead of blindly following a routine, an AI-enabled machine can perceive, learn what’s in front of it, and try to respond intelligently. Someday, intelligent robots may intuitively be able to pick up an unfamiliar object or solve a problem without human help.

Warehouses in particular are seeing an unprecedented rise in automation, says Matt Beane, an assistant professor at UC Santa Barbara, who studies adoption and use of advanced robots. Worldwide unit sales of “professional service robots” increased 41 percent during 2020, according to recent data from the International Federation of Robotics, while money spent in that category increased 14 percent—implying that the technology is steadily becoming cheaper. Sales of robot arms alone in the US were up 37 percent year-over-year in the first nine months of 2021, according to the Association for Advancing Automation, with warehouse deliveries now rivaling auto manufacturing.

But Beane also notes that the vast majority of this increase involves technology that has been around for decades, like simple sorting systems or dumb industrial robots, like Amazon’s current fleet, that follow repetive actions without adapting.

Only a small proportion of deployments use real AI, such as robots that reason about how to grasp an unfamiliar object, Beane says. For now, he says, robots can pick a limited range of items from a bin or a conveyor or navigate around buildings, but they cannot step in for people doing complex manipulation and tend to fail when faced with problems.

“I am not aware of a single person that has lost their job because of some AI-enabled robot,” he says. “That’s not to say it hasn’t happened, but it’s just far too rare and far too experimental.”

Amazon’s competitors are rushing to adopt more automation as they try to keep up, and investors are plowing large sums into startups working on warehouse robots. For instance, Berkshire Grey, a company in Massachusetts that sells custom robotic automation to a number of retailers and fulfillment companies, raised a total of $413 million before going public via a SPAC deal in February of this year. Investment in warehouse robotics rose 57 percent in the first quarter of 2020 compared to the same period of 2019, according to a report from PitchBook.

It’s unclear how the use of conventional robots has impacted the workforce at Amazon or elsewhere. Tasks like picking and packing products often still require human dexterity and intelligence, and Amazon says it will hire more than 150,000 seasonal workers to help deal with a surge in orders. Then again, the company might have needed even more workers if it weren’t for robots.

More robots might help fill the worker shortage in the short term, but eventually it could mean the elimination of certain jobs. Some research shows that adoption of robotics across the US economy since 1990 has resulted in fewer jobs and lower wages.

Amazon’s not alone in embracing automation for sorting packages and products, even if some of its competitors are shying away from the fanciest robots.

Last November, Walmart decided to stop using a robot that roams stores counting inventory on shelves, claiming that it offered no improvement over human workers. But this July the retailer touted a package-handling project involving robotic automation developed in collaboration with a company called Symbotic. The system developed involves custom-built machinery that removes boxes from pallets before sorting and routing them through a Walmart facility. The system replaces some human labor, but it needs only limited machine intelligence.

FedEx is conducting experiments using technology that helps automate the sorting of small packages and letters. Aaron Prather, senior technical adviser for robotics, automation, and workforce development at FedEx, says that where automation is introduced it typically relieves workers of mundane tasks. He adds that the use of AI is limited and the systems are still improving. “A lot of that is low-hanging fruit,” he says.

“The big realization in the industry is that there are always going to be edge cases that the engineers didn't anticipate,” says Daniel Theobald, cofounder and chief innovation officer at Vecna Robotics, a firm in Massachusetts that retrofits forklifts with sensors and autonomous software for companies including FedEx. “You need to let the robots ask for help when they need help.”

Plus One Robotics, a company that makes AI for robots, developed one of the systems FedEx is testing to sort letters and small packages. But even this relatively simple work is taxing for AI, says Plus One CEO Erik Nieves, who notes that a human has to intervene roughly seven times an hour when the system has difficulty deciding where to grasp a package or letter from a pile.

One advantage that AI has, at least, is that it can improve over time, even if those improvements are incremental. Vecna recently released a software update, for instance, that lets its forklifts move faster. Nieves, who previously worked for a company that supplied robots to automotive companies in Detroit, says that even if robots won’t solve the current worker shortage, they are likely to become a more significant part of the warehouse workforce in time. “I have lived this before,” he says in reference to automotive manufacturing. “Warehouses will get there eventually.”