A 3D laser scanner is shaking up component inspection at CERN 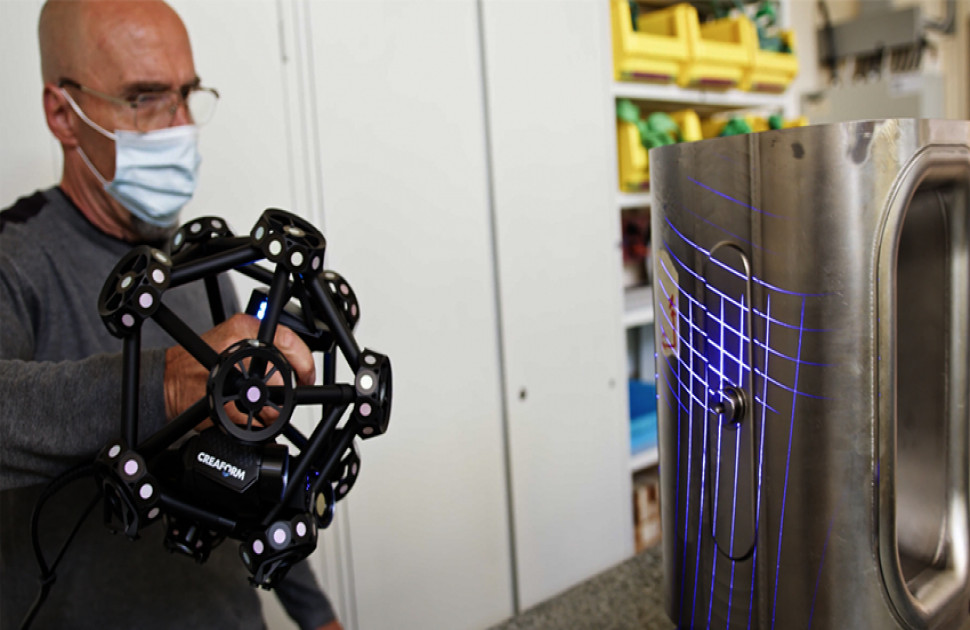 Several months ago, a new recruit joined the ranks of the metrology laboratory’s measuring devices, housed in Buildings 72 and 100. It may be less imposing in scale than the many other pieces of kit for which the laboratory is well known, such as the tomograph, but this new scanner can inspect components quickly and precisely, thanks to the 3D laser technology it uses.

The scanner is spherical in shape, easy to manoeuvre thanks to its internal handle, and covered in targets that are captured by a pair of standing cameras located at least 1.5 metres from the component that is being inspected. First, the cameras record the measurement volume defined by the reflective targets, as well as the position of the scanner in 3D space and its orientation, before the latter sweeps the component with blue lasers forming a grid pattern that gradually moves across the entire surface as the operator turns and moves the scanner around the object (see video). The positions of the lasers on the surface of the component are detected and the resulting multitude of points is then used to produce a digital reconstruction of the component with a volumetric precision of between 64 and 78 microns, depending on the component’s volume.

A specialised software program is then used to meticulously compare the digital reconstruction with a perfect theoretical model of the component in order to identify any material deviation from the latter. The comparison produces a colour-coded image that highlights areas where the component has too much or too little material. It is then possible to obtain, point by point, a value for the deviation that has been measured. Armed with this information, CERN clients can, if necessary, modify the component in a workshop to align it as closely as possible with the theoretical model.

“This type of scanner is widely used in the automotive, aviation and aeronautics industries. Since the laboratory acquired one in January 2020, the demand for component inspection has exploded, with a wide variety of clients approaching us with all kinds of components,” explains Ahmed Cherif, who is in charge of the metrology laboratory. Crab cavities, magnet yokes, beam screens and even the ALICE inner tracker have already been exposed to the scanner, which can model all kinds of material and even the most convoluted shapes (a small additional sensor can be inserted into the narrowest holes to scan their interior). The only real limitation is the size of the components to be inspected: their dimensions may not exceed 16 m3, which is the maximum volume detected by the cameras from a given position. The measurement volume can be increased by adding more stations, but the accuracy of the measurement will be somewhat affected.

If you think that this device may meet your component inspection needs, or if you have any other questions on metrology, please contact ahmed.cherif@cern.ch.