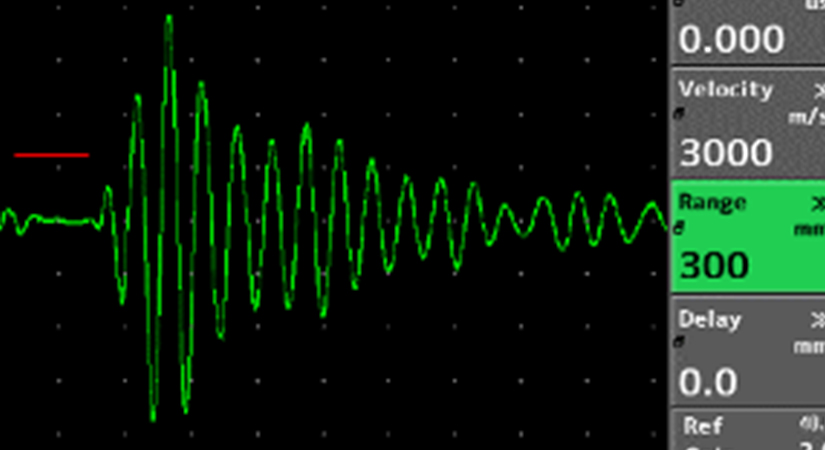 The Dryscan or Shadow Technique is a proven method for the non-destructive testing (NDT) of high-tech materials used in many industries including space and aviation.

It is especially useful for composite, honeycomb and hybrid structures, which cannot be examined successfully by conventional NDT methods. This technique can be used in the through transmission mode i.e. with the signal passing directly through the test material from the transmitter to the receiver, and also in echo mode when working with the transmitter and receiver transducers on the same side of the specimen.

The dry coupling technique offers several considerable advantages. For example, a wide spectrum of transmitted signals (0.1 – 33.0MHz) is used and as a result many of the geometric considerations conventionally applied in ultrasonics do not apply. Typically, the transmitter and receiver transducers need not be in alignment, they can even be oriented at a right angle to each other. This characteristic, plus the ability to use a transducer with a tip as small as 5mm diameter, enables testing to be achieved that cannot be dealt with by conventional means.

With the Dryscan technique, highly effective signal transmission can be achieved by using a completely dry contact system. The ultrasonic energy is coupled between the transducers and the material under test without the need for a coupling medium. This is achieved by using transducers with pads produced from a special material developed by Sonatest. Transducers can be held stationary or they may be roller type for continuous pass scanning using various manual or automatic manipulation systems, which can be linked to C-Scan recording systems. The Dryscan method is simple to apply and requires only a minimum of operator training. No radiation, contamination or degradation of the test pieces occurs.

The main advantages of the Shadow Technique are summarized below:

The Dryscan technique is typically used in through transmission (shadow technique), with a transducer either side of the part to be tested, although due to the low frequencies (0.5 – 1.35MHz) used testing can also be performed from a single side. The transmitted ultrasonic pulse is a short burst, wideband, signal with very little damping creating a characteristic signal envelope.

With the Dryscan type of transducer, the received signals produce a typical pattern. The first group of signals in this pattern usually contains from 7 -10 cycles.

The condition of the material is decided from three factors:

As a general rule, the structure is considered to be good provided: