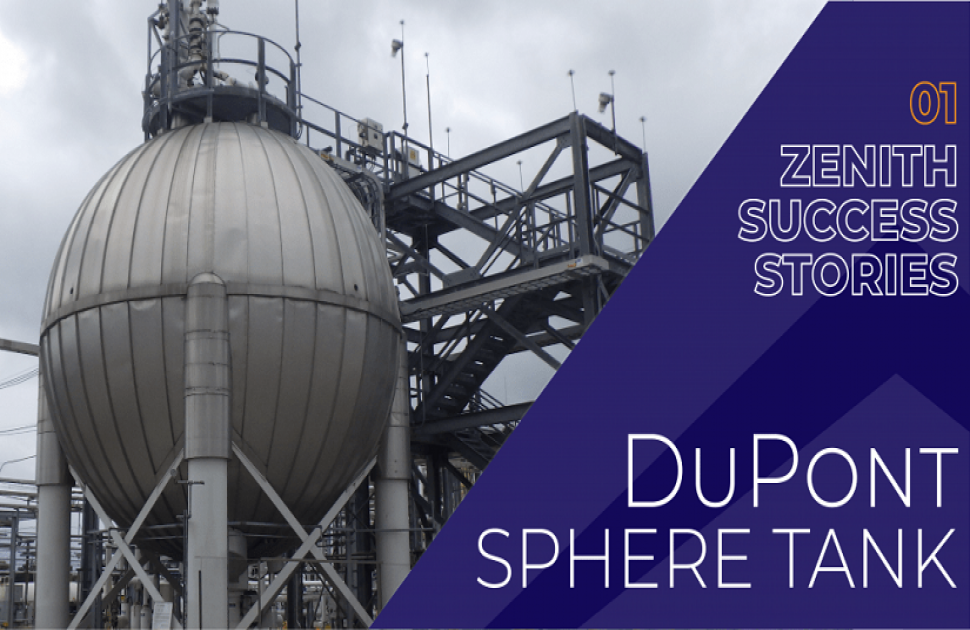 Due to API standard guidelines, DuPont was required to inspect a 22 ft. sphere tank at their Louisville site, which is used to store vinyl fluoride.

Past inspections have been completed by erecting a complex cantilever scaffold, inside the tank, using a center column.  The build and tear down of the scaffolding requires two full days to complete and costs $20,000 – $25,000. Once the scaffold is competed, inspectors spent up to two days visually inspecting the interior of the tank for cracks close to welds and heat effect zones, delamination of metal, or any other types of foreign formed materials.

DuPont needed to resolve two issues with their current process: time and safety. The site no longer wanted to have the tank unavailable for four days due to production constraints. The site’s safety team also wanted to eliminate the need for human entry into a dangerous, confined space and the use of the scaffolding.

Interactive Aerial proposed completing the tank inspection with their Zenith.  The Zenith is a new type of inspection system which utilizes many advanced systems, allowing for easy inspections of vertically confined assets. The unit has a stabilized camera capable of capturing 4k video and 18Mp photos with a 30x optical zoom. Hanging from a cable and free spinning bearing allows for unlimited rotation, which enables the operator to see virtually any spot inside the tank. Lowering into assets is a breeze with the included battery-powered Smart Winch system, requiring no manual operation during the asset inspection.

Due to the asset shape and the point of entry not being centered, an asset-specific automation mode was created by Interactive Aerial’s engineering team.  This mode allowed the Zenith’s 4k camera system to capture the interior with the same zoom level and frame overlap accuracy despite the varying distances from the interior walls.

Since the point of entry was only six inches in diameter, inspectors were able to take advantage of Zenith’s multiple configurations.  Using the smart winch system, the cable was dropped through the point of entry to the bottom of the tank.  Using their retrieval hook, the inspectors were able to attach the unit to the cable through a larger opening at the bottom of the tank, never breaking the plane for confined space entry.

The automation mode used a combination of horizontal and vertical panoramas taken by the auto-stabilized 18MP camera. This simple-to-use automation feature ran smoothly and in less than 30 minutes, Zenith had completed 100% coverage of the tank.

DuPont was extremely happy to see, from the photos, that the original markings from the welders were still visible.  In addition to a successful inspection, the company saved over 3 days of downtime and close to $25,000 is scaffolding cost alone.