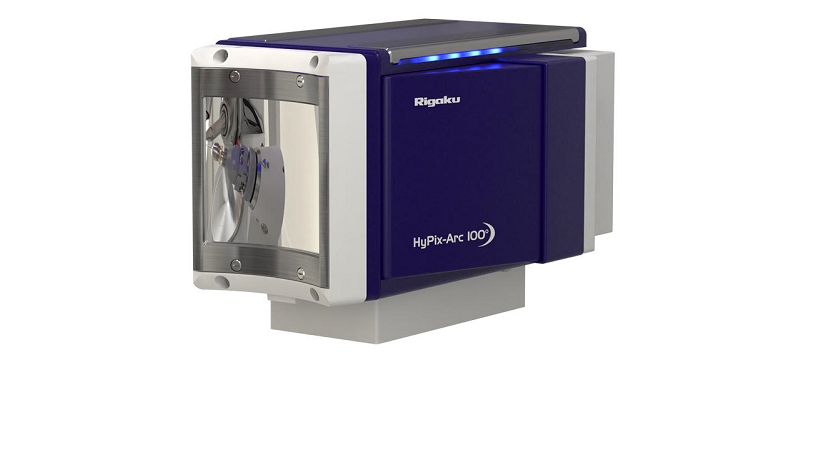 Rigaku is pleased to announce the release of the Rigaku HyPix-Arc 100° curved photon counting (HPC) X-ray detector for single crystal X-ray diffraction applications. The newest addition to the Rigaku HyPix line, the HyPix-Arc 100° detector applies Rigaku’s curved HPC concept to a smaller, more agile form factor. It follows the early success of the HyPix-Arc 150° detector, which demonstrated that curved detectors were not only sensible but also highly desirable. The detector was first announced in the November edition of Crystallography Times, an electronic newsletter published by Rigaku focusing on single crystal X-ray diffraction.

Rigaku adopted the HPC detector technology for its HyPix brand of detectors due to its unique, beneficial characteristics. HPC detectors directly count X-ray photons as they strike the detector and eliminate the need for an intermediate conversion of X-rays to light and subsequent integration of the signal.

The HyPix-Arc 100° detector offers 100° of angular coverage from edge to edge and a 17° larger capture angle compared to a flat detector, delivering enhanced speed for rapid acquisition of complete and redundant data. The curvature minimises peak distortion by ensuring that, even at short crystal-to-detector distances, diffracted beams are closer to perpendicular than is possible with a flat geometry, which improves data quality, enabling the collecting of more data in a single exposure with less reflection profile distortion. The angular coverage is more than enough to collect complete single crystal diffraction data according to International Union of Crystallography (IUCr) guidelines from a single theta position, even for Cu Kα X-ray wavelength.

HyPix-Arc 100° detectors are ideally suited for measuring diffraction from small and poorly diffracting samples due to the extremely low noise characteristics. Counting can continue as long as needed without the dark current or noise build up seen in other detectors.

High and low angle data are measured at the same time, under the same conditions, for better scaling, faster data collection and reduced dose time. The physical size of a detector face is not an indicator of how much data can be measured, as it also depends on the crystal-to-detector distance, relative pixel size, and point spread function or lack thereof.

HPC detectors can be positioned much closer to the sample, leading to a larger apparent aperture size. When the aperture is curved, it creates an even larger capture angle in the horizontal direction and far surpasses the flat detectors of alternative technologies. Another advantage is the direct detection found in the HyPix-Arc 100° detector, resulting in reflections that are sharper and more easily resolved.

The HyPix-Arc 100° detector is available as an option on the popular Rigaku XtaLAB Synergy line of X-ray diffractometers for single crystal X-ray diffraction analysis.