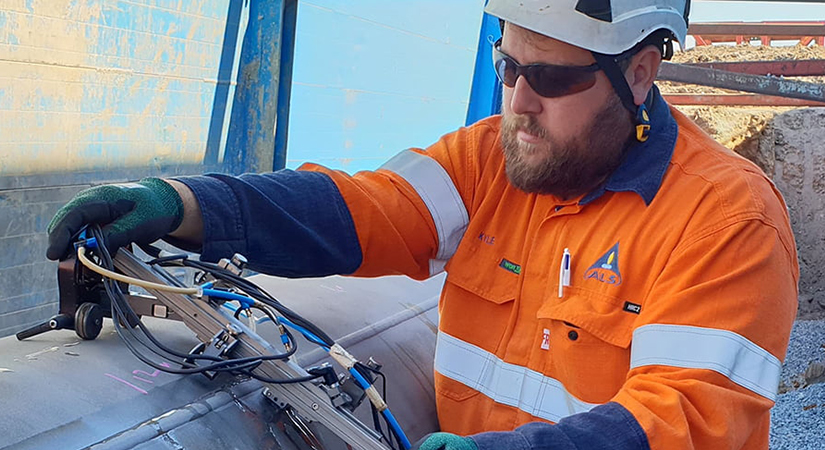 Amongst the many NDT approaches to flaw detection, Phased Array Ultrasonic Testing (PAUT) has emerged as one of the leading detection and visualization approaches and is steadily replacing less advanced NDT methods.

The benefits to PAUT are undeniable, and when compared with Radiography it is clear why the PAUT approach continues to be adopted as the standard for detecting internal flaws or defects in materials and weld configurations.

The PAUT technique follows the same principles as conventional UT, however, differs in its ability to electronically generate a range of angles and focal depths at an almost simultaneous rate. With PAUT, results are presented in digestible, intuitive image format.

In terms of the PAUT equipment, the PAUT probe is formed of multiple, small crystal (elements) with each individually wired into the acquisition unit, as opposed to one large transducer crystal as used for conventional UT. By voltage pulsing the individual elements in a given timed sequence (phasing) the individual wavelets generated in the component destructively and constructively interfere with each other to form a plane wave in the direction determined by the delays between element pulses.

Compared with conventional UT, PAUT offers enhanced visualisation capability given the technique’s ability to manipulate and refract the ultrasonic beam. This heightened capability improves detection, sizing and defect characterization. When performed as a Radiography alternative, PAUT may be used to test welds in materials if ½” (12.7mm) or less.

The Advantages to PAUT

Radiography has been the go-to inspection approach within the industrial industry for a number of years. Nowadays however, more advanced approaches have taken over and overshadowed RT’s somewhat laborious flaw detection approach. More and more, PAUT is considered the chosen method over radiographic inspection for a myriad of reasons.

Amongst the most compelling reasons for the PAUT drive are the reduced OHS safety hazards of the method. Radiographic inspections obviously require radiation and bring additional licensing and personnel demands. This radiography often necessitates temporary site evacuation, or alternatively limits the radiography inspection to be performed outside of work hours. This adds to logistical demands and typically increased financial costs. Furthering this, the use of ionizing radiation on often crowded worksites bring health and safety concerns when considering the implications of its use.

The PAUT advantage lies in the eliminated OHS risks and heightened production rates. With PAUT, once a weld has cooled, the entirety of the weld volume, root, fusion boundaries and heat affected zones (HAZ) are able to be scanned. This can all be achieved without exclusion zones or insight tradeoffs. This almost real-time insight into welds allow problems to be swiftly identified ultimately reducing the potential reoccurrence of systematic procedural issues.

The reduced inspection time, reduced safety concerns and ability to reduce potential rework has driven the adoption of PAUT globally. When considering these reductions, it should be noted that PAUT has considerably cut time and personnel demands. Within one shift, a technician can scan up to 100 welds compared with two radiography technicians who may be unable to achieve half of that volume. The radiography team would be further delayed by film processing and analyzation demands.

PAUT has been greatly accepted as the replacement for radiographic inspections. The modern, simple and portable PAUT equipment has further accelerated the acceptance of PAUT inspections and will undoubtedly replace even more RT inspections where possible over the coming decades. Whilst RT still has merit, the considerable advantages and reduced safety concerns make PAUT a preferred inspection choice for flaw detection in many applications.