NDT UV Lamps “Stabilize” vs “Warm Up”, What’s the Difference? 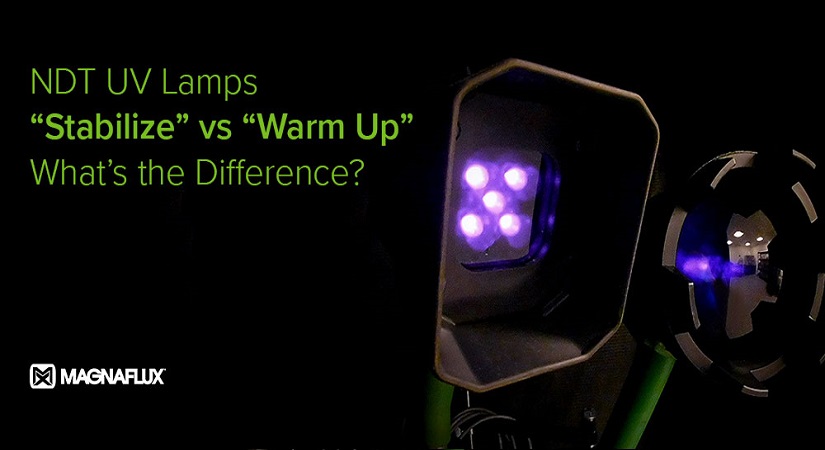 One advantage to LED UV lamps is they are at full intensity from the instant they are turned on, unlike traditional mercury vapor black lights which require 10-15 minutes to get up to full intensity. So it can be confusing when the product data sheet for an LED UV lamp lists a “stabilization” time. How can the LED lamp be instant-on but still need time to stabilize?

To answer that, we have get into the details of how different lamps work.

It takes about 10-15 minutes to get enough mercury vapor inside the bulb to produce full intensity. That’s where the “warm-up” time for a traditional mercury-vapor lamp comes from: the bulb literally needs to warm up to generate light.

LED’s have an opposite response. An LED is a semiconductor chip that emits light when current is passed through it. In general, semiconductors are more efficient when they are cold, so an LED has maximum efficiency (i.e. puts out the most light) when the lamp is first powered up.

The flow of current through the LED chip warms it up, which reduces the efficiency. Which means that as an LED light is used, the amount of light it generates will go down. To manage this effect, LED lamps are designed to move heat away from the LED chips until the overall temperature stabilizes.

That’s why LED lamps have a “stabilization” time instead of a “warm-up” time: the intensity will drop until the temperature stabilizes. But it’s important to realize that LED efficiency works both ways: turning off an LED lamp will let the LED chips cool down, and their efficiency will go back up. So the LED UV lamp will be back up to its maximum intensity the next time it’s turned on.

For example, a stabilization time of 5 minutes means the intensity will decrease during the first 5 minutes of operation, but after that it will remain stable within +/-5%.

By understanding of the difference between “warm-up” and “stabilization” times explains why a tech sheet for an LED UV lamp will include information on stabilization time. Mercury-vapor ultra-violet lamps need to physically warm up to get up to full intensity whereas LED lights have full intensity immediately when powered on, but intensity will decrease slightly until the temperature stabilizes.