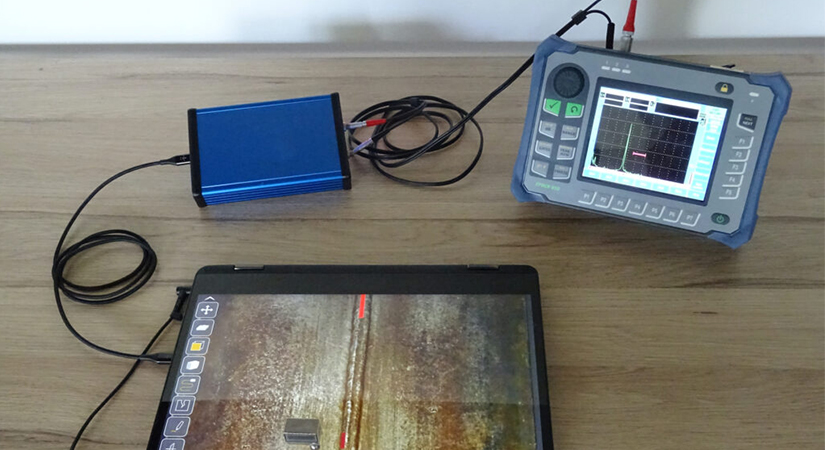 Historically, if you wanted to learn a nondestructive testing (NDT) method or technique, you learned with a combination of book study and hands-on practice. More recently, online courses have evolved to augment or replace book study, but hands-on training in NDT has remained something obtained via hands-on practice, typically in a laboratory classroom environment. Several shelves are usually taken up with test and calibrations pieces, as well as bins of available ultrasound and eddy current probes. For radiographic testing (RT), equipment is limited and test pieces may require lifting equipment to be properly positioned under the X-ray machine.

One benefit of new technology such as NDT training simulators, is the ability to provide a highly portable way to gain hands-on experience.

The next generation of hands-on training blurs the lines between computer training and hands-on training via the use of NDT simulators. One particular benefit of this new technology is the ability to provide a highly portable way to gain hands-on experience. For example, an ultrasound simulator can utilize custom software and a dummy probe with a commercial off-the-shelf laptop and touch screen to mimic much of the touch and feel of a real inspection. The dummy probe is similar in size, shape, and weight to a real probe, and like a real probe, slides on the virtual part where the position and skew of the probe determine the amplitude obtained. The laptop screen is used to display a virtual ultrasound scope or an adapter is used to connect an actual ultrasound device to the simulator. By using the adapter, an inspector can practice using different equipment to set key parameters like the material velocity, gain, and gates.

Several virtual parts can be loaded onto the touch screen, where a photograph displays the calibration block or virtual test piece. Just like with a real inspection, first calibration is performed, and the screen adjusted as needed to display the calibration reflector(s). While performing the inspection, switching from the top to a side of the part is done with a touch of a button. Because the probe data is already in the software, only two dummy probes are needed to switch between various longitudinal and transverse transducers in the simulator database. This lets someone have access to multiple probes and multiple components for a virtual hands-on experience while taking up very little space and weighing significantly less than a variety of traditional steel training blocks. Hands-on features that are not yet accounted for with the simulator include proper use of couplant, surface roughness, and the pressure on the probe by the user.

There are a few ways to obtain the UT simulator data. The first is by recording large amounts of experimental data very precisely. The advantage of this is very realistic signals, including those from material noise. The obvious disadvantage is the amount of time needed to acquire such data. Using computer simulation, large amounts of scan data can be acquired more quickly. However, the signal-to-noise ratio is likely to be uncharacteristically good. Another option is to overlay simulated flaw-detection data on top of experimental scan data of a defect-free part. This creates more realistic results yet makes it possible to customize virtual test pieces to specific needs. For example, simulated flaws could include detection of lack of fusion on a weld prep, or other embedded flaw conditions that may be difficult to obtain in a real mock-up with known precision of the size, shape, orientation, and position of the defect.

Unique tools display the sound path on cross-sectional view and an image of a flaw on top of the part.

While there are a few aspects of traditional hands-on inspections that cannot yet be simulated, as described above, there are also helpful features that are easy to include with a simulator, but difficult if not impossible to include with metal mock-ups. These include tools such as the ability to show the sound path in the part on a cross-sectional view, to track the student’s scan path to verify if sufficient coverage has been obtained, and to display the image of a flaw on the top of the part.

An eddy current simulator can be made using a concept similar to the ultrasound simulator, using software, a laptop, and touch screen. Again, a library of virtual parts is used to provide access to several virtual test pieces, as well as a library of available eddy current probes, saving a significant amount of storage space compared to use of real probes and test pieces.

One of the big advantages of an RT simulator is providing training and skills maintenance without radiation. Virtual reality (VR) is used to simulate the entire inspection setup, from walking into the X-ray room, to setting up the position of the source, specimen, detector, image quality indicators (IQI), and     even markers. By using VR, a student can gain experience with changing parameters without first providing radiation safety training or worrying about students complying with safely requirements.

How does RT in VR work? VR goggles are worn to view the virtual setup which includes both a lab and X-ray room virtual environment. The virtual radiographer can add markers on the part, such as a serial number, as well as pick out the correct IQI from the virtual drawer and place it on the part. The radiographer sees a set of virtual hands that move based on their movements. After completing the virtual shot, an image is displayed corresponding to the settings chosen, including source-to-film distance and exposure time.

Additional benefits of teaching the practical aspects of RT using VR include the ability to have each student with a headset use the VR X-ray room at the same time, change and reposition parts without the need for special lifting equipment, and the ability to change the radiographic source between various X-ray levels, including gamma isotopes such as iridium.

A benefit of teaching the practical aspects of radiography using VR includes the ability to change the radiographic source between various X-ray levels, including gamma isotopes such as iridium.

Additional benefits of teaching the practical aspects of radiography using VR include the ability to have each student with a headset use the VR X-ray room at the same time, change and reposition parts without the need for special lifting equipment, and the ability to change the radiographic source between various X-ray levels, including gamma isotopes such as iridium. While VR cannot replace taking an X-ray shot in the real world, it can go a long way toward augmenting training so that by the time a student takes their first real life radiograph, they have a much better understanding of how to set up a good shot.

As computing power increases, virtual reality improves, and smart phones become ever more multifunctional, new simulator options will evolve that further blend the line between hands-on and computer-based learning. While the systems discussed in this article are those that run on a laptop, it is possible that in the near future such systems could be powered via the web to share a large database of examples. Another interesting feature could be including random defect positioning so that one virtual mock-up exercise actually corresponds to a set of different situations.

One thing is sure, ideas that people once only dreamed about are becoming a reality.