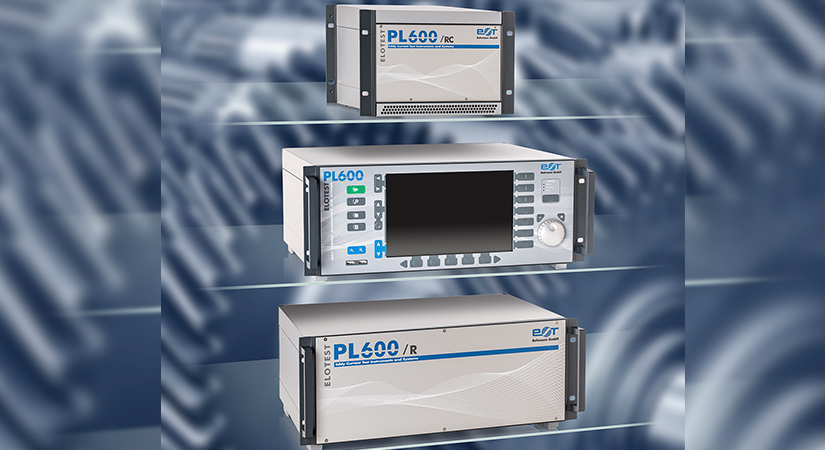 “ELOTEST PL600” is a technological development from Rohmann. The family business in Frankenthal in Germany has been developing and marketing eddy current testing instruments and accessories for non-destructive materials testing for 43 years now. But what can PL600 do? Which advantages does it offer to the user?

In particular in fully and semi-automated production lines, different materials testing processes take place at the same time. Whereas parts have to be tested for differences in hardness at the beginning, they may have to be tested for cracks in the downstream production process. For this purpose, previously, several instruments were integrated into the line. The modular design of the PL600 makes it possible to combine testing for cracks and heat treatment as well as testing for material mix-up and grinding burn, so that a single testing instrument is sufficient for a wide range of applications in several stations. The instrument is fully integrated into the line by wide-ranging I/O functions with a fieldbus connection.

The “Super-Finisher Mode” is a special application for the inline inspection of rolling elements with functions such as the integrated parts recognition, wear protection monitoring and the sorting of parts. “Multiplex” is designed for a great diversity of applications with parameter and sensor multiplex for up to 64 virtual mux channels per eddy current testing module. The “EMDC” technology – electromechanic distance compensation – serves to keep a constant distance between the sensor and the part being tested. It is used for non-circular parts and for parts with complex geometries.

The “FastSort” mode serves to sort parts quickly with 1, 4 or 8 frequencies, with harmonic analysis as an option. This mode is used to determine material properties, differences in hardness and/or geometric variations. “Q-Sort” makes an exact fingerprint of the material properties at up to 24 sample points, including the harmonic analysis with automated parts recognition and a teach-in function. “Mean-Sort” is applied in microstructure testing with up to 8 frequencies. An average value is calculated over a longer test period (e.g. for long products).

“Eddy+” is a patented, unparalleled test method. It has been developed for the recognition of partial hard spots on heavy plates. 960 sensors are used in specially designed testing systems, 64 sensors are used with the mobile testing trolley for materials testing. The sensors are also developed and manufactured by Rohmann.

The automatic filter adaption, depending on the testing velocity, several evaluation thresholds per virtual Mux channel and the internal distance compensation are just a few more features of the digital testing instrument. The “EloLine” software for long products, also developed by Rohmann, or “ScanAlyzer” for recording and evaluating eddy current data can be run on a separate computer.

ELOTEST PL600 has been complemented with a 19" (PL600/R) and a more compact 9.5" (PL600/RC) remote version for integration in automated systems. The operation of the two remote devices takes place via an external touch screen. The Remote Client Software connects the two instruments with another computer in a network. The 19" versions (ELOTEST PL600 and PL600/R) are provided with a total of 16 slots, the 9.5" version (PL600/RC) is provided with a total of 7, while one channel is always provided with the standard configuration.

A licensing system, specially conceived for the ELOTEST PL600 family of instruments, means that the client only has to pay for the technical function required for the actual testing task. The inline instruments are thus available at an attractive starting price. As the ELOTEST PL600 can be adapted and modified or upgraded at any time, it is a valuable investment for the future.