BOILER INSPECTIONS: HOW CLEAN IS CLEAN? 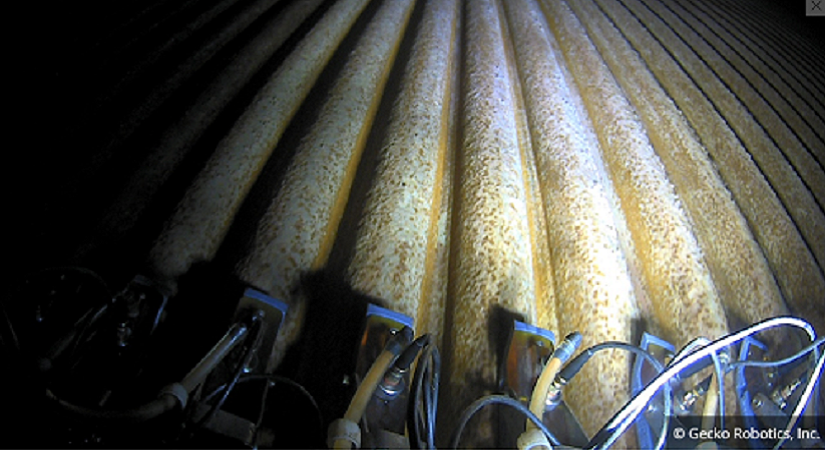 When it comes to boiler inspection preparation, a common question Gecko receives is: What level of cleanliness should be achieved to ensure optimal data collection?

Our mission is to expeditiously deliver the most accurate and detailed data as possible, but asset conditions can impact our robots’ abilities to do so.

To review some ideal and undesirable scenarios when it comes to prepping an asset for an upcoming inspection, we caught up with David Kahan, Gecko’s Director of Paper and Power, to provide some insight.

“Cleaning is imperative to a successful inspection,” he says.  “Just as manual UT [ultrasonic testing] readings require a clean surface, Gecko does as well.”

What differentiates Gecko, however, is based on the couplant* delivery method.

“Because of this, we can overcome tubes that are not perfectly cleaned to a white metal finish (NACE #1 / SSPC – SP5),” Kahan says. While flash rust and light scale are acceptable for Gecko data collection, “mohawks”—smaller ridges of ash buildup—and large buildup of slag or clinkers are not.

There are several cleaning methods that can achieve adequate inspection conditions. Gecko recommends explosive blasting or high-pressure washing, each of which presents pros and some potential cons.

Explosive blasting is a quick, efficient and effective way to clear out thick slag. It isn’t new, as the process was first used in the 1960s, but it has become state-of-the-art through decades of experience. Though dynamite was used initially, today, blasting is usually performed with binary explosives, which are largely considered a safer alternative. During this process, explosives are attached to boiler tubes via detonation cords, and when ignited, the percussion generated by the blast is powerful enough to dislodge and break up slag. Often, several passes are needed to fully clean out the boiler, but the process is very effective. When performed by experienced professionals, the procedure can be done quickly and safely.

High-pressure water washing with a “whirlybird” or 3D lance is another means to quickly and sufficiently clean boiler tubes. This process can be performed without having to take the boiler offline, depending on the asset. It is very effective in removing buildup and scale from strategic locations in the boiler, due to the powerful outflow of water.

There are several other methods of boiler cleaning operators may choose to use, including the following:

Getting All the Data

Adequate cleaning is imperative to a successful inspection, but how, exactly, does insufficient cleaning impede data collection? “In a normal inspection, the inspector is attempting to take one valid reading per inspection location,” Kahan explains. “Gecko’s approach is to make the entire asset the inspection location.  As the crawler travels up the wall, it collects 10 readings per second, per sensor.  This can result in several hundred readings per linear foot of an asset.”

During data validation, dirt, debris or unclean areas can result in poor readings. Gecko’s goal is to provide the true lowest reading per linear foot of the asset, but if unclean, it may result in 250 of 270 readings being invalid, Kahan advises. While Gecko can still provide data from a set of 20 readings, he says, it is much more advantageous to have 270 of the 270 readings—all of them—be valid.

Simply put, Kahan adds, “The cleaner the asset, the better the inspection.”

In Gecko’s experience, results of tests performed in unclean boilers vs. clean boilers speak for themselves. In one instance, a utility in Kentucky used only explosive blasting for man-safe entry only, and does not perform any other types of cleaning, Kahan says. “This results in some areas that are impassable by the robot because of slag thickness. Therefore, Gecko’s inspection stops short of the total asset.”

And on top of the inability to collect data in full, Kahan adds, a lack of cleaning can prolong inspection time. “There is additional downtime by Gecko to clean the robot’s wheels to ensure safe operation, resulting in extra time in the asset,” he says.

In another example, in preparation for Gecko’s first inspection, a utility in Ohio performed some blasting for man-safe conditions, as well as a handheld water cannon. While Gecko was able to collect a large portion of the data, Kahan says, there were areas where asset uncleanliness prevented valid readings.  Based on further conversations with the plant, a switch was made for subsequent inspections on identical units, which yielded significantly more actionable data.

Having covered cleaning recommendations and how preparation is key to optimal data collection, the following are some image examples of acceptable conditions, as well as unacceptable.

Acceptable: Flash rust on a boiler tube after a water wash has been performed

Acceptable: Some fouling on the boiler tubes but will not impede inspection abilities.

Unacceptable: Mohawks down the crown of the boiler tube.

Unacceptable: Large buildup and clinkers that could be safety hazards as well as impede inspections.