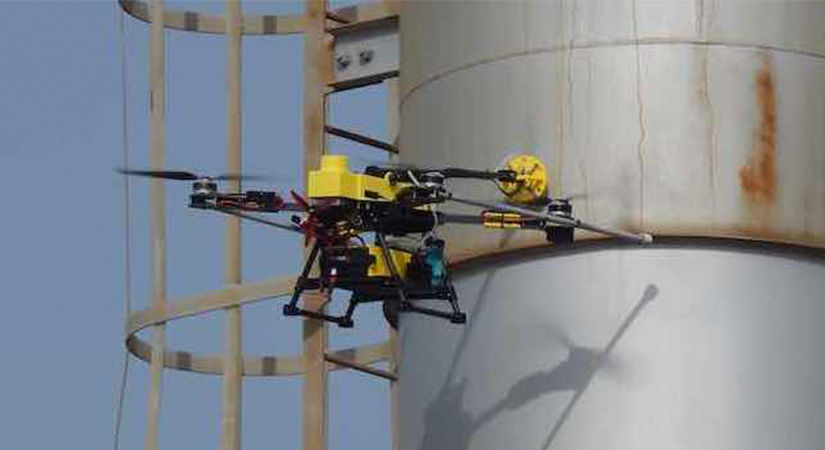 Remotely operated robots are moving into new territory in oil and gas with aerial robotics, which offer some unique potential for companies operating in dangerous conditions. Aerial robotics company Apellix makes drones for inspecting, cleaning, painting and coating the oil and gas industry’s above-ground assets. Storage tanks for crude oil, for example, can be up to 150 feet in diameter and 48 feet tall and hold over 6 million gallons of petroleum.

American Petroleum Institute (API) regulations require that above-ground storage tanks’ wall thickness and protective coatings thickness be tested regularly. At high elevations, this is a dangerous job for humans. But not for flying robots.

“API 653 inspection of an above-ground storage tank typically takes 2 people about 2 days and requires a lift or cherry picker to go around and take about 60 measurements,” said Apellix CEO Bob Dahlstrom. “With our system, depending on weather, the condition of the tank and different environmental variables, we can easily get 200 measurements an hour.” We can then provide that information to the asset owner. Their engineers will have a much better idea of the representation of the asset than if they took just 60 measurements. And we can do it in a day versus 2 days.”

In UT, the drone uses a probe to send an ultrasonic pulse through the wall of a steel structure to measure its thickness. These readings gauge corrosive wear and remaining service life of the asset. DFT testing measures the thickness of coatings on ferrous and non-ferrous metals.

“Where we really save companies a ton of money, and we’re talking millions of dollars a day, is when we’re able to do a job without taking an asset out of service,” Dahlstrom said. “We’re testing the thickness of the steel on flare stacks, the big chimney you see on refineries that vent and burn off excess gas. You have to take periodic thickness measurements on those stacks, because they are corroding from the inside at variable rates depending on what type of gases are being vented and burned off.

“But to shut that system down, let the stack cool and bring in a cherry picker or lift, or a crane, or put somebody up there to rappel down and take those measurements manually, they could be losing millions of dollars a day in lost revenue. We’re doing it hot.”

The robot doesn’t care if it’s 50 feet or 150 feet in the air and the surface it’s contacting with the probe is 200 °F. The robot is safely doing something a person couldn’t. That’s when the savings start accruing. 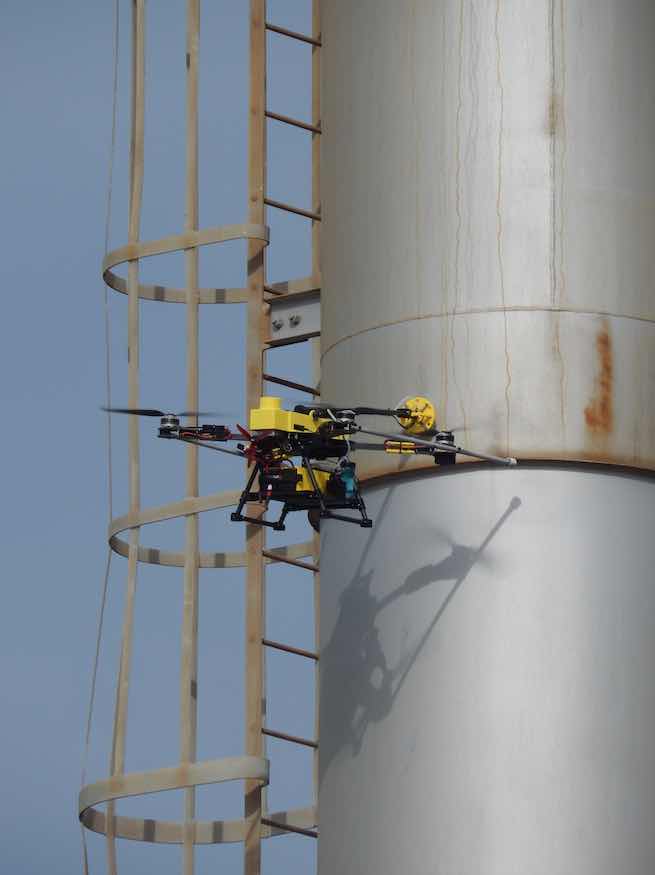 Apellix already has drones in the field performing UT and DFT measurements for oil and gas assets. Their next foray is spray painting. Apellix won an international competition sponsored by Dutch multinational paint and coatings company AkzoNobel. That led to a joint development agreement to bring a spray-painting drone to market. Along the way, Dahlstrom learned painting industrial assets is less about aesthetics and speed and more about the science.

“You’re protecting millions or billions of dollars in assets. They measure the thickness in millimeters, like the thickness of a human hair and thinner, so it has to be applied properly to be warranted by the paint company and also to protect the underlying asset.

“A robot is so much better at this because it has all the data to calculate barometric pressure, relative humidity, ambient temperature and the temperature of the surface being coated, the characteristics of the coating, and the speed,” Dahlstrom said. “That tells us the distance the drone needs to be from the surface, the speed it needs to be moving and the size of the spray tip. It’s very science-driven. For these industrial applications, that’s critical.”

Depending on the job, the drone can be tethered to shore power (a ground-based power station) for all-day power, or for short-duration work, they can swap out the battery every 15 to 20 minutes.

The Apellix system uses a custom drone with an array of sensor systems, full onboard computer, proprietary software and an end effector with custom 3D printed components. Custom fabrication was the only option because typical sensing systems like GPS, a compass and barometer used by off-the-shelf drones and even standard aircraft are all adversely affected when in close proximity to large steel structures.

“That’s why we had to load ours up with so much onboard computing power and so many sensors,” Dahlstrom said. “Because we’re in essence flying by our sensors, rather than flying by things a drone would normally use for its operations.”

In essence, Apellix drones are flying computers. It’s the software flying the ship, which brings up some challenges relating to autonomy. U.S. Federal Aviation Administration (FAA) regulations require the presence of a manned pilot. So even if the drone is flying autonomously, you still have to have someone there monitoring it. Apellix drones are manual and autonomous.

“There are certain autonomous features, like takeoff, where it takes off, hovers, calibrates and then the pilot manually flies it to the location where it will start its work. The drone is using the input from the onboard sensors to fly. We’re making 50 micro-adjustments to the flight per second. A human just can’t do that. So having the software and the onboard sensors do the flight is key to our success.”

Then there’s the data. Dahlstrom said the data this robotic aerial system collects is more important than the individual job it’s doing. 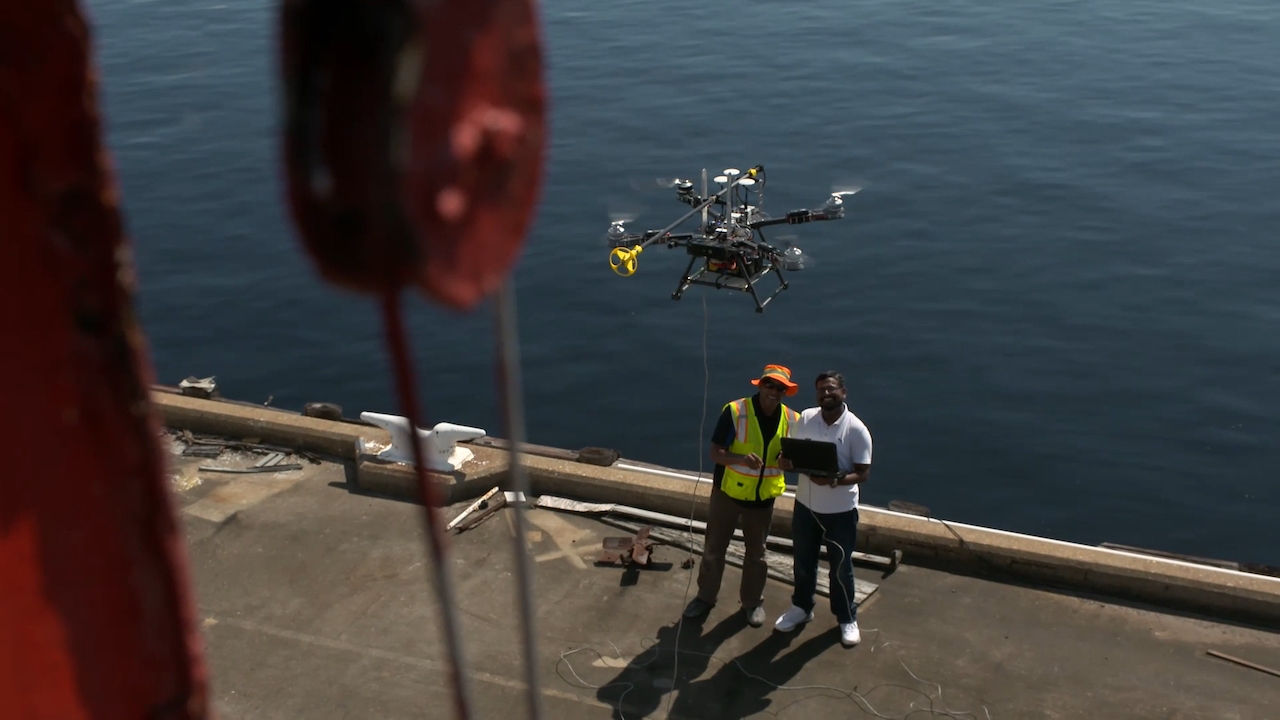 “Right now, we give that data to the job owner,” Dahlstrom said. “That’s creating a lot of value. It gives them an understanding of their particular asset at that particular point in time. But once you start aggregating that data and uploading it to the cloud, now you have the ability to do machine learning and AI. Couple that with all the flight data and high-resolution video capture, then when you start adding things like multispectral cameras that can see things humans can’t, you’re able to collect a rich dataset that has never been gathered before. Having this information can lead to actionable insight that increases the service life of the asset and keeps it running safely.”

Tanya M. Anandan is contributing editor for the Robotic Industries Association (RIA) and Robotics Online. RIA is a not-for-profit trade association dedicated to improving the regional, national, and global competitiveness of the North American manufacturing and service sectors through robotics and related automation. This article originally appeared on the RIA website. The RIA is a part of the Association for Advancing Automation (A3), a CFE Media content partner.